Opinion: Independent journalism is a pillar of open society

Diversity and pluralism are the basis of journalistic credibility, as is competition between public and private media outlets, says Mathias Döpfner, president of the Federation of German Newspaper Publishers (BDZV). 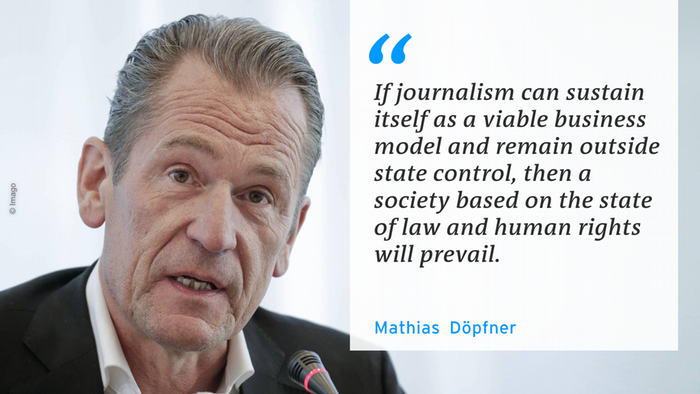 We are living in confusing and uncertain times. The world order seems to be disintegrating. Europe and the US are growing apart. China is striving for global domination. Russia's behavior is becoming increasingly outrageous. Islamists are assaulting open society. Populists are on the rise from London to Budapest. Artificial intelligence could make humans servants of algorithms. A virus has put the world in a state of emergency and occasionally brought it to a standstill.

In such times, thoroughly researched, truthful information becomes more and more important — a historic opportunity for journalism. During all this, our business model has been changing from an analog one to a digital one. This transformation is great, but it confronts many publishers with existential challenges.

The future of independent journalism — or, to be more precise, of "independence" and "journalism" — is at stake. We often use these two words naturally. After all, provided we stay within the bounds of the law, all of us in Germany can write what we want. But this does not mean that we actually do so. The influences and pressures we come under are sometimes subtle. So, what goes toward making journalism independent?

In my view, there are few prerequisites, but these few are essential. First, there must be a willingness to take on those in power. Over the past decades, many people have risked or lost their freedom, their careers and, not least, their lives for having sought the truth and for having the courage to call social injustices by their name.

Those of us who can do our reporting from the comfort of a country under the rule of law have a particular obligation to fight for the right of journalists to do their work freely and without risk to their health or lives. In 2018, 63 journalists were killed. In 2019, that number was 38. It is well worth fighting for this goal. But 38 is still 38 too many! And, unfortunately, I am not sure that things will get more positive for journalists in future.

Secondly, being truly independent requires financial independence. Private financing and a sound business model are essential features of independent journalism. Only they can guarantee diversity. Only when financial incentives encourage as many business people as possible to invest in journalism can there be diversity and competition.

Journalism involves a constant juggling act with regard to closeness and distance to the centers of power. Journalists have to be close to politics and political events so they can see things clearly. But they also have to be able to detach themselves to look at things from a distance. Both points of view are important. But where the financing of private media outlets is concerned, we cannot be far enough away from state institutions.

Thirdly, true independence requires diversity. This diversity fulfills two functions. To start with, for clarifying facts it is essential to have journalistic competition for the best story, as well as a range of different voices with their various points of view and comments. Competition between different media outlets is the only effective formula for combating fake news, propaganda and manipulation.

Read more: GMF digital session: The power of influencers — and what they mean for democracy

Media diversity also protects the freedom of the press as a whole. Politicians may take action against individual media outlets when they don't like a particular report, but they can't muzzle an entire industry. In other words, the more robust journalistic outlets there are, the smaller the possibilities will be for the state to put pressure on each individual one of us.

For our newspapers to be independent and diverse, we need a level playing field. This is particularly the case with regard to the big media platforms. It must never be the case that two or three global platforms replace the infrastructure of thousands of smaller publishers and determine what millions of customers get to read, what is right and what is wrong, and what is good and what is bad.

In recent days, discussions in the political sphere about the role of big platforms have become more and more frequent and increasingly critical. And the tone of these discussions is changing.

The question is now frequently not whether these market-dominating companies should be broken up, but when and how. In my opinion, that can be only the last measure. And it does not need to be. We publishers just want healthy, successful players in a fair and working media ecosystem.

For this reason, a better, more modern and more agile form of regulation is needed that can meet the challenges of digitization. This includes both an implementation of the EU copyright reform directive that is faithful to its wording, and the effective regulation of platforms.

I am firmly convinced that if critical journalism continues to play an influential role in our society, if journalism stays financially healthy and detached from the state and if media can keep working independently, problems ranging from those of global geopolitics to the apparent omnipotence of artificial intelligence can be solved.

Then, the greatest achievement of modernity — open society based on the rule of law and human rights — will triumph.

Read more: Good journalism is not always enough, it must also be accessible

Mathias Döpfner is the president of the Federation of German Newspaper Publishers (BDZV), the umbrella organization of German newspaper publishers. He is also the CEO of Axel Springer SE. This op-ed is a shortened version of a speech he gave to the BDZV-Congress this year on September 15.