The treatment of Turkish journalists ahead of the NSU trial at a court in Munich causes damage to Germany's reputation in the world, says DW's Baha Güngör. 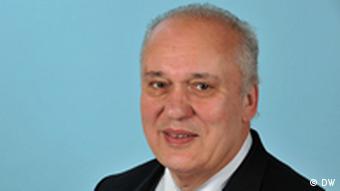 Let's assume Germans are killed for years by a fascist underground organization in Turkey. The presumed murderers are caught and charged, but German media miss out on reporting on the trial because of technicalities. Can you imagine the outcry from the German public or how strident the call to respect press freedom would be? Not to mention the heavy criticism that would hail down on the Turkish judiciary.

The Upper Regional Court in Munich does not seem to be aware of the consequences of not reserving seats for Turkish media at NSU trial. These are not common criminals in the dock, but Beate Zschäpe, a presumed member of the neo-Nazi gang that called itself National Socialist Underground (NSU) and four alleged accomplices.

Eight people of Turkish origin are among the murder victims of the terror cell. A Greek businessman and a German policewoman were also killed. Two months before the 20th anniversary of the arson attack of Solingen, the timing couldn't be worse for Germany. Five Turkish women aged between four and 27 were killed in the attack and 17 others were injured. The Munich court's decision shows a high degree of political insensitivity. This case is also about Germany's image in the world.

The court in the Bavarian capital decided which media would be present in the courtroom gallery by its standard operating procedure. But it could have also ruled differently, according to experts on judicial and constitutional matters. Such a procedural change was possible for the trial against celebrity television weatherman Jörg Kachelmann. In 2011, the Mannheim regional court guaranteed seats to Swiss media representatives since the accused was a Swiss citizen.

It wouldn't hurt the Upper Regional Court in Munich to grant 20 of the 50 available press seats to Turkish and Greek journalists. In contrast to the court, experts can't think of any legal reasons why the proceedings should not be viewed in other rooms via video link. The court's argument that this would render the verdict contestable in the case of an appeal is simply not convincing.

Because of the numerous mishaps and shredded files during the NSU investigations, the media in Turkey and Greece have been bursting with conspiracy theories. The Munich court's decision only adds fuel to the fire. Germany must brace itself for accusations of tolerating xenophobia, not taking violence by right-wings extremists seriously and even euphemizing the activities of neo-Nazis.

The court can still revise its decision. The trial is set to start on April 17, there is enough time to move away from its legally correct standing. It's the court's' duty to avert further damage from Germany.