Opinion: G20 teetering on the edge of the abyss

Leaders of the world's top economies have agreed on a joint statement after marathon talks and staunch resistance from the United States. The G20 has long been in trouble, writes Bernd Riegert from Buenos Aires. 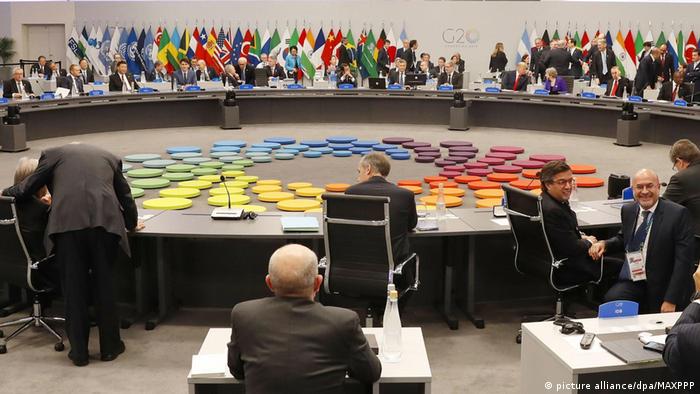 Ten years after its founding at the level of heads of state and government, the Group of 20 is clearly on the wane as a forum for solving global problems. Set up in 2008 to regulate spiraling financial markets in the midst of a striking crisis, the G20 format has managed to survive. It's not that the idea of finding global solutions to global problems is a bad one, the difficulty is that many of those at the negotiating table have lost the political will to find such answers. Isolation, nationalism and protectionism have increased following the financial crisis as the alleged consequences of globalization that has widely been perceived as unbridled.

The leader of this movement is undoubtedly the haphazard US president, Donald Trump. He is an avowed deconstructivist — someone who wants to tear down the existing order because he doesn't think it works in his favor. He simply makes new rules for himself that only apply to him. All that counts is quick, popular success at home, nevermind the rest of the world.

But Donald Trump — and here's the crucial point — is not alone.

The Russian president, the Saudi crown prince, the Turkish autocrat and the Chinese president at the G20 table don't have much respect for law and justice. And there are more and more representatives joining the "My country first" club. In Mexico, a populist has just taken office. In Brazil, a professed right-wing radical will be moving into the presidential palace come January. These changes don't bode well for the next G20 summit in Osaka, Japan.

It's gradually becoming a lonely struggle for the German chancellor, the Canadian prime minister, the French president and EU representatives — those who held up the flag of multilateralism in Buenos Aires.

Even within the EU, populism and isolationism are spreading. After Brexit, the most recent example of this shift is the populist government in Italy.

Reading the thin communique adopted by G20 members, it appears that this assembly representing two thirds of humanity is little more than an empty shell. Admittedly, the leaders did commit to reforming the international trade system. But in the meantime, members of the G20 impose punitive tariffs on each other in an attempt to get a bigger piece of the global economic pie. There's certainly a wide gulf between theory and practice.

Is the end nigh?

Trump may soon be the death of the G20, a summit whose plenary meetings he only occasionally took part in. As far as his obsessive security adviser is concerned, the forum is redundant, despite it being the only economically relevant steering committee at the global level. It's difficult to explain to the public and voters at home, if there are any, what the G20 is good for when there is a growing number of insolent lone fighters sitting around the table.

To date, the G20 hasn't even managed to do its quintessential job — namely, to regulate the global taxation of digital companies. In Buenos Aires, fair taxation was once again postponed, at the insistence of the United States, until the summit after Osaka, should it still take place. Downgrading the G20 to the ministerial level, like it was before 2008, or getting rid of it altogether, would be handing a victory to the nationalists that should not be granted. Perhaps the summit will continue in the coming years, but the G20 could easily become a "dead man walking," condemned to political execution.

The G20 summit is supposed to focus on development and infrastructure. But Jamal Khashoggi's death, the war in Yemen, a US-China trade war and the Russia-Ukraine conflict are also expected to be major talking points. (30.11.2018)

On the sidelines of the G20 summit in Buenos Aires, the German chancellor called for the release of Ukrainian sailors seized by Russia last weekend. Putin called Kyiv's ruling party a "party of war." (01.12.2018)

President Trump and Chinese leader Xi held private talks many hope will reverse an ongoing trade war. The meeting came on the heels of a G20 summit that called for revamping world trade rules. (02.12.2018)