Opinion: Finland election a sign of things to come for EU

The Social Democrats only narrowly beat the far-right during the recent vote in Finland. The outcome is yet more proof of an alarming trend ahead of European Parliament elections next month, says DW's Bernd Riegert. 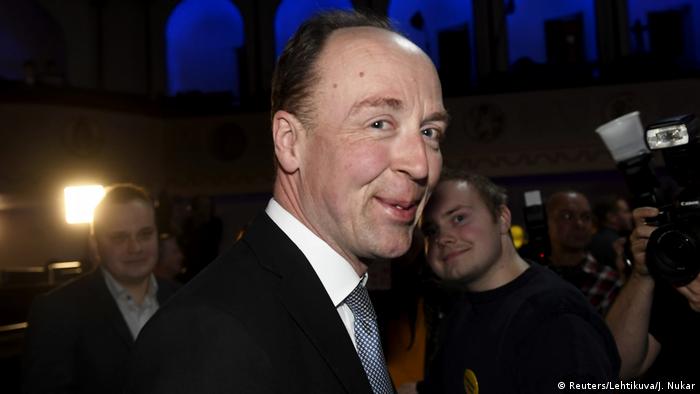 At first glance, it would seem social democrats — who are struggling across Europe — should be pleased that one of their parties has finally won an election. The Social Democratic Party of Finland (SPD) will indeed be the strongest party in the country's new parliament, but with just under 18 percent of the vote, they will only get 40 of the 200 seats. That means they are far from having a majority. They will probably lead a coalition government, however, and a Social Democrat could become Finland's next prime minister.

A closer look shows that the far-right Finns Party is only 0.2 percentage points behind the SPD, and it has 39 seats in parliament. So there is no reason to rejoice, especially not for the more liberal, established governing parties that voters have chastened in spite of economic success. After its split and a renewed radicalization two years ago, the Finns Party has climbed back from poor opinion poll ratings.

The Finns Party's new party leader, Jussi Halla-aho, a philosopher who has previously been convicted and fined for inciting ethnic hatred and blasphemy, rallied around the issue of immigration during the campaign. At the beginning of the year, the Finns Party was polling at 10 percent, but then a high profile criminal case led to a debate about asylum seekers and criminal migrants. According to police statistics, 18 percent of criminals are migrants while migrants as a whole make up less than 3 percent of the population. The number of votes that went to the far-right populists almost doubled.

In order to win votes, Halla-aho used the same strategy many right-wing populist parties resort to: disproportionately inflating and generalizing the actual problems criminal asylum-seekers pose. Suddenly, all immigrants became potential sexual criminals, the people of Finland were threatened by an "invasion" of Muslims. The actual figures do not back up those claims, but it was nonetheless easy to tout the mantra: "Finland first."

Since 2015, and with a noticeable rise in immigration in Finland, the liberal government in Helsinki, like all other European governments, has tightened asylum laws, facilitated deportations and launched integration programs. As everywhere in the European Union, the number of new arrivals from non-European countries has fallen drastically since then, but a right-wing populist like Hallo-aho can still garner support. Unfortunately, this phenomenon is by no means restricted to Finland.

The fact that most immigrants in recent years have come from Russia and Ukraine — and not from the Muslim world — played no role in Finland's election campaign.

Six weeks ahead of the European Parliament elections, the results of the Finnish parliamentary vote point to a trend throughout the EU — more moderate governing parties are failing, opposition parties are gaining ground and far-right populists are winning at an above-average rate.

People are obviously dissatisfied with their governments; they want change even if their feelings of insecurity are not always supported by facts. In Germany and France, too, right-wing populists will probably do well in the European Parliament elections, while the establishment parties will lose out. Italy's governing right-wing populist Lega party is on the verge of a huge increase in support. Right-wing populists already rule in Poland, Hungary and Austria, and they remain strong in opinion polls ahead of the European Parliament elections.

The next EU bellwether vote is in 13 days, when Spain goes to the polls. The Social Democrats are currently ahead there, but whether they can win enough support to form a government is questionable. By centering its election campaign around immigration, the far-right populist Vox party has been gaining ground in Spain. Meanwhile, the left-wing populists who campaigned against EU austerity policies are losing ground. As in Finland, the Social Democrats in Spain will most likely finish on top. But as in Finland, a troubling trend is bubbling under the surface.

Government forces clash with Taliban in Afghanistan 24m ago