Opinion: Farage is gone - but not for good

With the Brexit vote, Nigel Farage has achieved his life's goal. Now he has stepped down from the leadership of the euroskeptical UKIP - something DW's Barbara Wesel fears is only political theater. 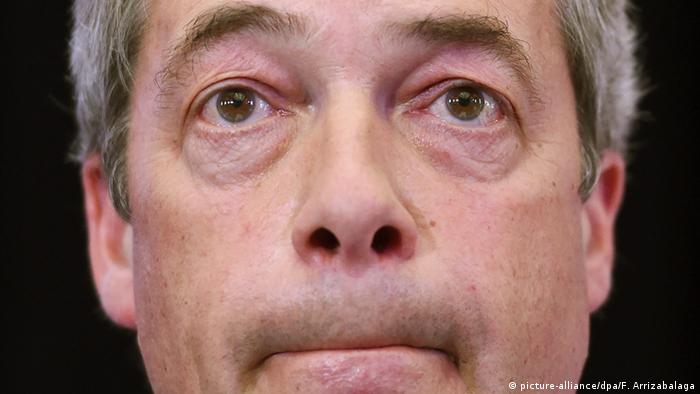 Yet another Brexit champion has thrown in the towel: After the departure of Boris Johnson and the implosion of Michael Gove's career, Nigel Farage has now voluntarily relinquished the leadership of the United Kingdom Independence Party. It had been expected that Farage, with his trenchant remarks and his broad grin, would long be savoring his victory in the battle to leave the European Union.

But since this is the third time he's stepped down from the party leadership, one can hardly hope that Farage will really disappear from the scene. He's once again playing tactical theater.

There are two explanations for Farage's move: Some suspect he is looking for a role in the cabinet next of the Conservative government, or at least in the Brexit negotiating team. Or perhaps UKIP is even preparing for an early election, and hopes a less crude chairman could provide better opportunities, even to be a coalition partner for the Tories. Anyone who thinks Farage will permanently disappear from the TV news is likely to rejoice too soon.

Destroying the system from within

Nigel Farage has had shocking success in doing what the left once called the long march through the institutions: He has taken his place at the heart of the EU, collected hundreds of thousands from the European Parliament, where he steals the show, especially with lies and insolence. In his most recent appearance, following the referendum, Farage's triumphalism went far beyond his usual rudeness. Too bad the other deputies were too civilized to drag him by the ears from the hall.

The problem with reckless and unprincipled figures like Farage is that they destroy institutions from the inside, while adhering to the rules of parliamentarianism. They do everything to tear precisely this system apart.

The UKIP chief for decades ranted and polemicized against Europe. Falsehood and distortion were his favorite means: Any baseless polemic was fine, as long as it harmed the EU. And Farage repeated his slogans for so long and so shamelessly that an uninformed public ultimately began to believe them.

It is hard to explain why British voters let themselves be led by a Pied Piper like Nigel Farage. The former banker makes himself out to be a man of the people - but is just a cynical actor.

The vote against the EU was a success against the British establishment, the UKIP boss claimed from dawn to dusk. Then he went to a garden party with the newspaper owners Evgeny Lebedev and Rupert Murdoch. These are the ones whose militantly right-wing papers helped to bring about the Brexit.

And Farage's "Leave" campaign was financed by a multimillionaire businessman. It's a real grassroots movement.

Take his money away!

Nigel Farage is a creature from the deepest recesses of the political pond. He plans to keep on collecting his salary as an MEP until Britain has formally resigned from the EU. Is there not at least a means to block his parliamentary allowance?

The UKIP MEPs are like the turkeys who voted for Christmas, Farage said, because they abolished their own jobs. It's not funny, but revolting.

An ex-journalist with an intellectual bent, a hawkish interior minister who plugged "Remain," a doctor who quit the front bench, a man raised by a single mom on a council estate, and a fiery political "wife and mother." (30.06.2016)

Opinion: With Boris Johnson, a clown makes his exit

Boris Johnson was the face of the "Leave" campaign, helping it to victory. He seemed like a shoo-in for prime minister, until a close ally got in his way. A stroke of luck for Britain, says DW’s Barbara Wesel. (30.06.2016)

Germany urges climate activists not to 'endanger health' 1h ago

Spain: Lava from La Palma volcano to reach the ocean 1h ago

Opinion: The Russian election wasn't one 58m ago

Opinion: The next German chancellor must prioritize ties with Africa 3h ago