With his blanket criticism of the work of US intelligence services, President-elect Donald Trump undermines trust in public institutions in a negligent way, DW's Michael Knigge writes. 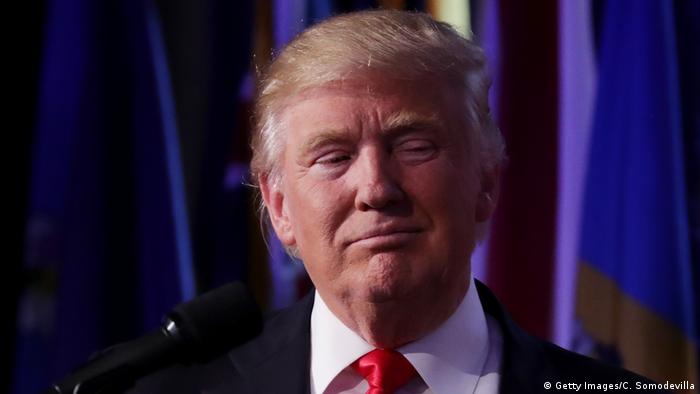 A US president does not have to be on friendly terms with his spy agencies. On the contrary: US history demonstrates - not only since the services provided false evidence of alleged weapons of mass destruction in Iraq, which were cited as a main reason for waging war against that country - that a healthy dose of skepticism, better still, a well-founded mistrust of the intelligence services, is necessary.

This applies to US intelligence agencies in their entirety, but also in particular to the current Director of National Intelligence, James Clapper, who has built up a reputation of occasionally bending the truth. During an official hearing in Congress on NSA spying activities in 2013, for instance, when he was asked whether the agency collected data from US phone call records, Clapper lied bluntly and repeatedly, claiming that this was not the case, and if it did, it did so "not wittingly."

However, although mistrust of the intelligence agencies and their upper echelons is appropriate, it is presumptuous, naïve and downright dangerous to generally disavow their work - something President-elect Donald Trump has been doing for some time now. His claim, made in December last year, that he didn't need an intelligence service briefing on a daily basis, only if the situation required one, because he was "a smart person," not only bears witness to arrogance and ignorance. Quite possibly, it also puts security in the US and throughout the world at risk.

Getting rid of the election stigma

The primary - and obvious - purpose of Trump's most recent jab at US intelligence agencies, in the course of which he cited WikiLeaks founder Julian Assange, is certainly to blot out, or delegitimize, the stigma of Russia possibly influencing his election victory. Simultaneously, Trump's clumsy maneuver, droned out via Twitter as usual, undermines US citizens' trust in their public institutions - trust that already has been shaken seriously.

To put it plainly: of course there is - and US services themselves confirm this in their recent report - no "smoking gun," no definite proof that Russian hackers, acting with knowledge or at the behest of high-ranking Russian politicians, are behind the attacks on Democrats. There are, however, countless indications which point to such a scenario. Such an approach would also match other already well-known Kremlin tactics.

It is not compulsory for anyone to share the views which are expressed by the intelligence services, by the White House and numerous security experts. But a president-elect should substantiate a dissenting view on an issue of key importance to both the US and the world in a more profound way than via a series of tweets whose primary source is obviously a Fox News interview with Assange.

Putting more trust in Assange's statement - according to which leaked information on US Democrats did not come from Russian sources - than in a joint assessment by US intelligence services is without precedent. Such behavior is dangerous and will probably provide delight in the Kremlin. However, Trump's reaction cannot really have surprised anyone. By repeatedly making vague remarks during his election campaign about the allegedly "corrupt system," he had already cast doubt on the democratic process in the US, in order to be able to shift personal blame in the event of an election defeat.

His approach with respect to criticism of the intelligence services is the same. For if we, in the meantime, have learned a lesson about the next US president, it is this: ultimately, despite Trump's controversial motto "America First," there's one individual ego that almost always comes before the rest: that of Donald Trump.

Have something to say? Share your thoughts below. The thread will stay open for 24 hours after publication.

Australia's Sydney braces for floods amid massive rainfall 3h ago