Germany’s Federal Constitutional Court has ruled that coronavirus restrictions are in line with the constitution. The decision gives lawmakers more leeway to deal with the pandemic in the future, says DW's Jens Thurau. 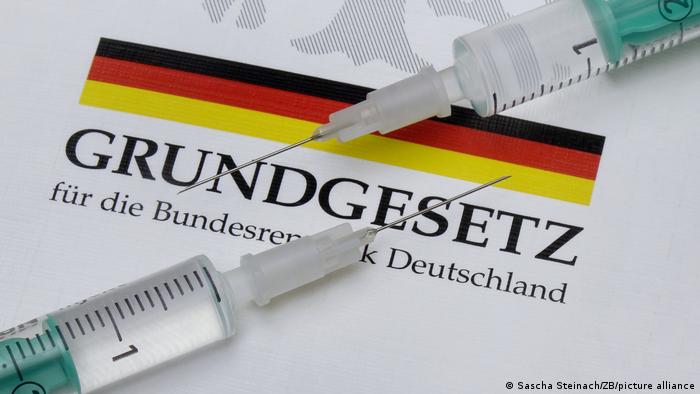 One thing needs to be said right away —  it's not a joke but a serious issue when the government of a free country forces citizens to restrict or cut off all contact with other people. Or when the state forbids citizens to leave their homes in the evening and at night. And if it does so, something really significant needs to have happened to justify it.

And that, according to judges at Germany's Federal Constitutional Court, was the case when the so-called federal coronavirus emergency brake was activated between April and June of this year. Although restrictions imposed by the German government on the populations of individual federal states to curb the spread of the coronavirus dramatically infringed on various fundamental rights, the judges said the restrictions were in line with the constitution "amid the extremely dangerous situation of the pandemic.”

For the future, that means whatever steps federal and state lawmakers decide to take in the current dramatic COVID-19 situation, they can be sure that they are at least largely acting in accordance with the constitution.

A shot in the arm for outgoing government

Of course, the current situation is hardly comparable to that in the spring. Around 70% of people in Germany have now been fully vaccinated and they are lining up outside doctors' offices and vaccination centers to get their third, booster shot. But the number of new infections is alarmingly high, the new omicron variant has sparked fear and hospitals are once again reporting huge caseloads.

Meanwhile, the country's politicians — between the outgoing and new governments — are engaged in an ugly and bitter dispute over who is to blame for massive failures during the pandemic.

There are lots of paradoxes and confusion in this current situation. Germany still has a comparatively low vaccination rate but at the same time most of the soccer stadiums are full for Bundesliga games. And Germans, whether vaccinated, recovering or unvaccinated, are called upon — not least by the federal president — to stay at home again if possible.

The ruling from Germany's top court in Karlsruhe is a shot in the arm for Chancellor Angela Merkel's outgoing government. Still in office for a few days, it wants to persuade successors from the incoming coalition government — made up of the center-left Social Democrats (SPD), the Greens and the neoliberal Free Democrats (FDP) — to continue to impose further restrictions and apply the emergency brake yet again.

Within the new coalition government, which will probably take office next week, it is mainly the FDP that has warned against measures that are too harsh and repeatedly disputed the constitutionality of individual measures. Those arguments have now been invalidated.

Regional lockdowns could be new normal

Meanwhile, Germany is once again grappling with a new coronavirus wave. People in regions with high infection rates will probably have to adjust to some type of lockdown, maybe even the whole country.

It is of little consolation that after many weeks the number of infections has stopped rising. Even if the Constitutional Court has now given politicians, regardless of ideology, a kind of carte blanche, it is high time for those responsible, even in this currently dramatic situation, to carefully weigh what is possible and what is not.

We cannot afford another situation where things come to a standstill for the country, for society, for the economy, for culture and for life itself. And it would do the country good if its elected representatives did not participate, as they have in recent weeks, in stigmatizing and excluding people who, for whatever reason, have not yet been vaccinated.

For sure, there are many hardcore opponents of vaccination and many who use their protest against COVID-19 measures simply to get even with the state they hate.

But not unvaccinated fall into this camp. It would be a prudent reaction to the court's ruling if politicians now tried to reach out to and address those people again, as difficult as that often is. Especially since compulsory vaccination can't help break the current wave anyhow.

To conclude, however, the ruling from Germany's Federal Constitutional Court is a clear admonishment to all those who loudly demand their right to freedom but always forget that freedom comes with responsibility. In this case, responsibility for those who are sick. And responsibility for the overworked doctors and nurses who have been on the frontlines fighting the virus for almost two years now.

Ukraine: Biden, Zelenskyy talk de-escalation with no end to tension in sight 4h ago