Results of last week's presidential election in Congo are delayed — another setback for the country's democracy. But pressure from the Catholic Church could incite violence and instability, writes DW’s Isaac Mugabi. 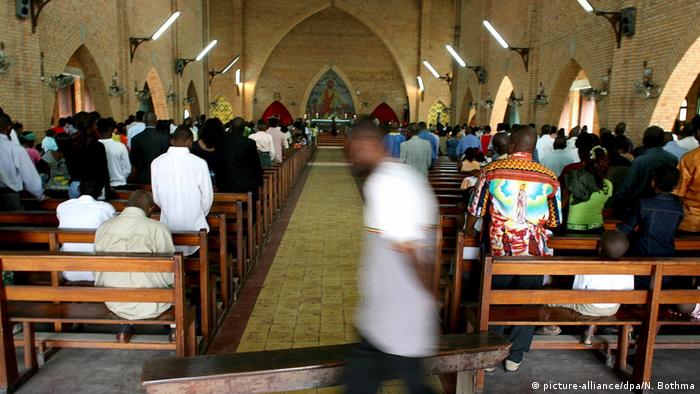 The first batch of results from last week's election in the Democratic Republic of the Congo was finally expected Sunday, according to the country's electoral commission. But yet another delay in the violence-plagued election now threatens to throw the Central African nation into political turmoil — thanks to the meddling of the Catholic Church.

In other African countries, like neighboring Cameroon and Uganda, the Catholic Church has been cautious in releasing statements with political connotations attached to them for fear of a backlash from the government. But here in Congo, the church has a history of meddling: In 2011, the church's allegiances were deeply divided, so it opted not to publish its results, despite evidence of massive irregularities and vote rigging that its observers had witnessed at polling stations.

Such antics are nothing less than shameful. Especially given that for opposition supporters in the capital, Kinshasa, the church is their sanctuary during trying times. Many are worried that Kabila's chosen successor, Emmanuel Ramazani Shadary, will win — and they were relying on the Catholic Bishops' Conference in Congo (CENCO), with its a network of 40,000 electoral observers, to release credible results. Given the internet and phone service shutdowns that have kept citizens in the dark, coupled with the violence that characterized the run-up to the election and the high stakes of the race, the church's approach is both irresponsible and dangerous.

Even the UN Security Council, which met behind closed doors to discuss the election, decided not to release a statement despite meeting for over two hours, instead joining many African nations in peacefully and patiently encouraging the government to release results.

Tensions have continued to rise across the country, and it appears that in the coming days the Catholic Church will continue to exert more pressure on the electoral commission to release the results. But this pressure could well trigger protests and a subsequent clampdown on dissent. In the short run, this could mean more misery for millions of Congolese who have known little peace since independence in 1960.

Instead, the church must do better and take a more proactive role. It is still not too late for the church to revisit its role of mediating between the government and society. In December 2016, for example, the church brokered a treaty between the opposition and the government that allowed Kabila to stay in office after the end of his mandate until presidential elections were held. Since then, however, the church has appeared more willing to work with civil society organizations and the opposition than the government. Such organizations might find the idea of the church as mediator unpalatable, but it would be considerably more responsible and constructive than simply stirring the pot, as it has done by teasing election results to an already tense electorate.

Realistically speaking, the church's influence in Congo politics is enormous. It has often filled the void for many Congolese in a country where the official systems are often failed or lacking — from education, health and foodstuffs to moral and spiritual support. In the absence of a well-functioning state in this vast nation, the church has always stepped in where the government has failed.

Last year's crackdown on protesters on church premises may have led church leaders to step back — but taking the bold step to now responsibly work with government and civil society could do much to quell the simmering tensions in the country.

US deploys troops to Gabon over possible DR Congo violence

Concerns are mounting that violence will erupt in DR Congo over last Sunday's contested election. The vote was marred by delays, irregularities and voting problems. (05.01.2019)

Ukraine rules out cease-fire with Russia — live updates 4h ago

Ukraine: Diplomacy only way to end war, Zelenskyy says — as it happened 10h ago

Opinion: Mariupol — a symbol of Ukrainian courage and Russian shame 21h ago