Internet, SMS messages and media have been restricted for a second day following a chaotic election. The opposition claims the government is committing election fraud. 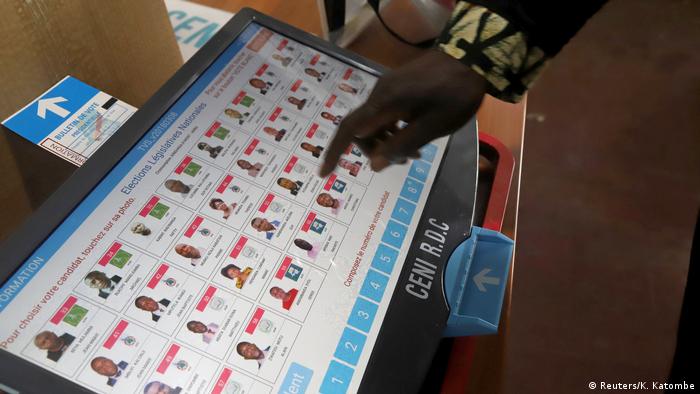 The Democratic Republic of Congo's government cut internet and SMS services across the country for a second day on Tuesday, further threatening the credibility of a delayed presidential election marred by irregularities and voting problems.

The government said it shut down communications for "security reasons" as votes were being tallied from Sunday's election.

In a joint statement, the European Union, the United States, Canadian and Swiss heads of mission in Kinshasa urged the government to immediately restore communications.

"We request that the government refrains from blocking means of communication, in particular access to the internet and the media," they said.

They also called on the government to allow the main Congolese election monitoring organizations to have access to voting centers counting ballots. Final results are expected on Sunday.

The signal to Radio France Internationale (RFI), one of the most popular news sources in the French speaking country, was also jammed.

The opposition has expressed concern that the vote could be stolen by President Joseph Kabila, who had delayed elections for two years after the end of his second and final term. The delayed election triggered a violent political standoff that left dozens dead across the country.

Kabila's preferred successor, the former Interior Minister Emmanuel Ramazani Shadary, ran on the ruling party's ticket. The opposition says Kabila plans to rule from the shadows to protect his wealth and network of loyalist power structures.

The opposition has been split between two main candidates, Martin Fayulu, a former Exxon Mobil manager who was a relative unknown months ago, and Felix Tshisekedi, the scion of late opposition icon Etienne Thisekedi.

An opinion poll by the New York University-affiliated Congo Research Group days before the vote put Fayulu in the lead with 44 percent, followed by Tshisekedi at 24 percent and Shadary lagging behind with 18 percent.

Diplomats and election observers have said that the vast country was poorly prepared for the vote despite repeated delays.

Sunday's vote was marked by cases of hundreds of polling stations opening late, long lines, absent voter lists, problematic voting machines, confusion over where to vote and voter intimidation, according to election observers.

A decision by the electoral commission in late December to postpone until March the vote in the eastern cities of Beni and Butembo due to an Ebola outbreak also barred around 1 million mostly opposition supporters from voting.

Congo has never had a democratic transfer of power. Analysts say fraud could trigger a repeat of the violence similar to that following elections in 2006 and 2011.

Every day almost 9,000 tons of garbage accumulate in Kinshasa. The Congolese capital does not have a functioning garbage collection system. Consequences for the health of the "Kinois" are catastrophic. (03.12.2018)