In an attempt to push through a "soft" Brexit, the EU has now put the UK on a long extension leash. But DW's Bernd Riegert wonders — will more time actually mean less chaos? 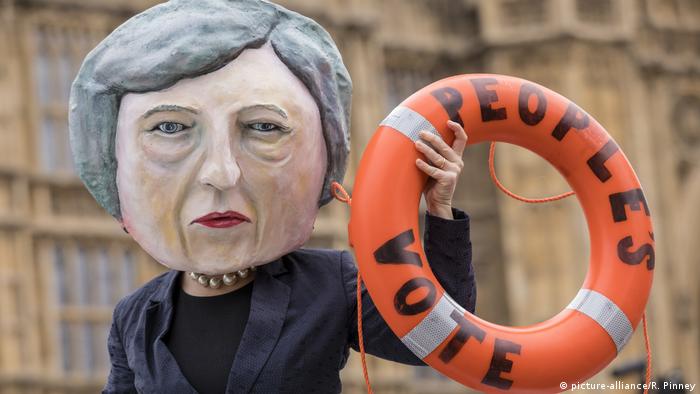 The Brexit show is getting more and more absurd. The member state that wants to leave, but is unable to organize an orderly withdrawal may now be forced to take part in the European parliamentary elections. Elections for a body that they don't really want to belong to anymore.

It's no wonder, then, that hard-line Brexiteers came up with the idea to seize this opportunity and sabotage the European Union from the inside after the election — throwing sand into an already sluggish gear. The EU is now trying to cover the absurdity of the situation with a flexible extension that comes with certain conditions.

If the British finally agree to a necessary withdrawal agreement, they can leave the bloc at the beginning of the following month, but no later than October 31. The question as to why setting a limit was even necessary at all was no longer raised.

With a completely divided Parliament and a prime minister without power or support, Britain must be well behaved at the EU's table and must not obstruct the EU's work during these domestically turbulent months until October. "Take back control!" — This magical promise looked somewhat different during the Brexit referendum campaign.

Long into the night at the EU leaders' summit in Brussels, the EU dictated the conditions of the extension to British Prime Minister Theresa May — deciding whether the renegade member state would leave without a treaty on Friday or in a few months' time.

Whether or not a withdrawal agreement will be ratified by both sides by the end of the new extension is by no means certain. It may very well be that the absurd show will drag on.

It's already clear that, if in doubt, there could be another extension at the end of October, as the EU does not want to be responsible for a hard Brexit under any circumstances.

The only neat solution without too much absurdity would have been for the British government to revoke Article 50. Then, Great Britain, as a full member state, would have had all the time in the world to sort itself out, make a new attempt and negotiate another withdrawal agreement with the EU.

The cries of the hard Brexiteers would have been great. Theresa May would have had to resign after the withdrawal of Article 50, but she already offered to do so anyway in order to bring Parliament in line.

Uncertainty for citizens and businesses remains. Everything is up in the air, which is poison for investment decisions.

Until now, the 27 EU member states have been remarkably united when it comes to the Brexit process. But this unity is now starting to crumble. France fought very hard against the long extension favored by a large majority of other member states.

Like Theresa May, France wanted an extension until June 30 to avoid the UK's participation in the European Parliament elections. Germany advocated for a delay until December or next March to finally get the tiresome Brexit issue out of the headlines.

In the end, a typical compromise arose, which cannot be easily justified from an objective standpoint. They then had to meet in the middle, at the end of October.

This extension already has a nickname: Halloween Brexit. On the last night of October, the spirits and ghosts are on the move — a good omen, perhaps?

Opinion: #MeTooInceste — A blind spot, not just in France 4h ago

Opinion: Protests in Tunisia come with a bitter taste 5h ago