Opinion: Boris Johnson turns his back on the EU during Iran crisis

Britain has joined the US in protecting international shipping in the Strait of Hormuz. The EU is miffed but not entirely innocent of London's change of heart, says DW's Bernd Riegert. 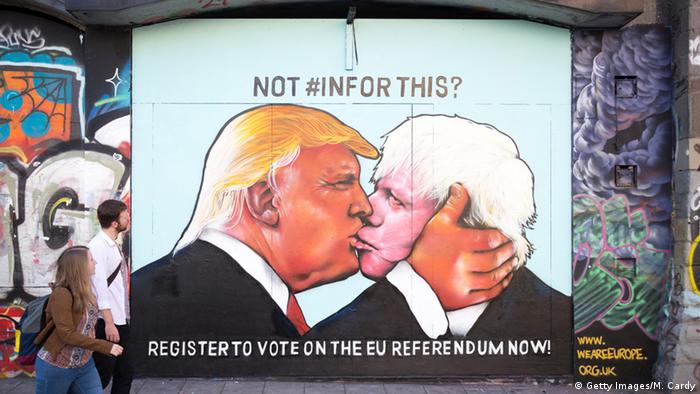 Just two weeks after taking office, British Prime Minister Boris Johnson took the side of his kindred spirit Donald Trump when the UK announced it would join the US naval mission in the Strait of Hormuz.

The European mission — proposed by Britain itself before the change in government — is now off the table. This puts Europe in a diplomatic bind as Germany and France have refused to take any part in the Operation Sentinel mission led by the US to protect tankers against Iranian attacks. For good reason: They do not trust the Trump administration and believe its policy of applying "maximum pressure" on Tehran will worsen, rather than improve, the situation.

Bernd Riegert is DW's Senior Europe Correspondent based in Brussels.

American and British warships in the strategically important Persian Gulf are bound to usher in the next stage of conflict escalation with Iran. The US has achieved its goal: It has driven a wedge into the European phalanx that — despite American pressure — had hoped to band together and save some form of the nuclear agreement with Iran. Those aims are even loftier since what little trust Iran had in the British is now diminished.

Britain's new foreign secretary insisted that he, too, wants to stand by the agreement with Iran to end its nuclear weapons program, adding that he doesn't want to impose new sanctions.

But this lacks credibility.

It is all too clear that there is one thing the UK — which is on the verge of a rough exit from the EU — wants more than anything and that is a quick trade agreement with the US. Boris Johnson is prepared to cut, to a certain degree, foreign policy ties with the Europeans and to sail in whichever direction the White House hawks are headed.

One of these hawks, US presidential security adviser John Bolton, may well be pleased. With the US withdrawal from the nuclear agreement and Britain's exit from the EU, he is getting closer to his dangerous goal of defeating Iran and bringing an end to Tehran's theocratic regime. Negotiations Trump sought to have with Iran are unlikely to happen with this approach. If talks do come about, they will fizzle out just as Trump's summits have with his "friend" and  North Korean dictator, Kim Jong Un.

Berlin, Paris and Brussels are "not amused" by the British change of course. German Foreign Minister Heiko Maas and the governing coalition in Berlin, however, are not entirely innocent. If Germany, France and other EU nations had reacted swiftly and decisively to the UK's initial call to launch a European mission, the withering away of European signatories to the Iran agreement may have been prevented. The German government's long period of hesitation, and the discord within the coalition parties made clear there would be no quick agreement on a European mission. Germany did not live up to its own claim of assuming more international responsibility.

Instead, Foreign Minister Maas now wants to put together an EU observer mission — minus Britain. Even this plan could take a while and will have little effect. Iran's Revolutionary Guards are not likely to be impressed by mere observers and scouting missions during current tensions. It is not difficult to understand why Boris Johnson and the British are frustrated by their European partners' muddling along.

But fleeing into the arms of an unpredictable US president is not the answer.

Iran's president has urged Washington to drop paralyzing sanctions as a confidence-building measure for direct talks. The US has increased pressure against the Islamic republic amid rising tensions in the Persian Gulf. (06.08.2019)

Germany votes: Berlin to get first female mayor 1h ago

Greece: One dead after earthquake hits island of Crete 1h ago

In Focus Germany votes: Big gains for center-left parties, heavy losses for conservatives — as it happened 5h ago