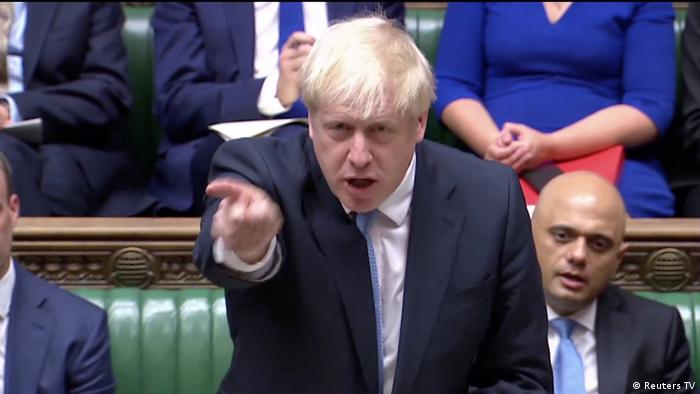 The speaker of the British Parliament called the prime minister's decision "constitutional outrage." That's a rather mild way to describe Boris Johnson's plundering of Parliament's rights. Now a weakness in the British political system — rooted in its archaic traditions and heritage — is coming back to haunt the country. It exposes the lack of a modern, written constitution that could block such arbitrary acts.

Read more: Proroguing Parliament — what does it mean?

Akin to a military dictatorship

"Take back control" was one of the main slogans of the Brexit campaign three years ago. Voters at the time probably didn't imagine that meant handing over absolute power to Johnson. On the contrary, there was talk of restoring the agency of the British Parliament. No one argued the goal was to allow an unelected prime minister — who would likely never get a parliamentary majority — to determine the fate of Brexit, and thus the entire country, on his own.

Prominent political figures, including former Prime Minister John Major, have said they will try to challenge Johnson's coup in court. It remains to be seen whether the institutional safeguards in Britain will hold. The opposition is hoping to push through emergency legislation next week to prevent Johnson's 11th-hour attempt to seize power. But only a few days remain, as Parliament is to be due to go on break as early as September 10, then return shortly before the Brexit deadline. This tight time frame makes it impossible for the majority of MPs to have their say.

The opposition — especially the Labour Party — is partly to blame for this deplorable situation: It frittered away three years, when there was a chance to stop the train, with ambivalence and indecision. There was a failure to comprehend what Brexit truly meant.

What Johnson is creating here is the kind of political madhouse befitting a military dictatorship. It is anti-democratic and matches the havoc wreaked by US President Donald Trump and Brazilian President Jair Bolsonaro. These new ravagers are only interested in power for themselves, and their financiers among the ranks of the super-rich. To them, democratic procedures and institutional controls are simply tiresome accessories.

The EU must not become an accomplice

There have been rumors in recent days that smaller, individual regulations could be used to find a solution to the Irish border issue. Even if the European Union were prepared to go down such a road just before Brexit, without thorough negotiation and review, the bloc must decide against being an accomplice to Johnson's arbitrary act.

Brussels must not play along when a member state suspends its democratic procedures in order to suddenly up and leave the EU. And let's take a moment to remember that Brexit came about by a nonbinding referendum that was only advisory, and decided by a narrow majority.

Britain must put up a fight

It is now high time for the remaining democratic politicians within the Conservative Party, for the collective opposition, for the political analysts, intellectuals and all those who consider themselves responsible citizens, to make a stand. For years, it has seemed as if many Britons were living in an alternate reality, as if at some point they would simply wake up from the Brexit nightmare and everything would be as it used to be.

Johnson is the most dangerous politician to have moved to Downing Street in decades. He is power-hungry, opportunistic and completely irresponsible. He makes unfounded allegations, as he just did at the G7, he makes threats against EU partners, and slimes up to the US president. He is only chasing after a single goal: To pull Britain out of the EU by hook or by crook. As we are now witnessing, Johnson is even prepared to oust Parliament and override the democratic legitimacy of the country — the kind of move that one might expect from Russian President Vladimir Putin. Those in the United Kingdom who do not heed the alarm bells, who do not try to resist, are beyond help.