With each day of the invasion, the pressure grows on Western companies to shutter their operations in Russia. Businesses that continue to operate there will have to withdraw sooner or later, DW's Miodrag Soric writes. 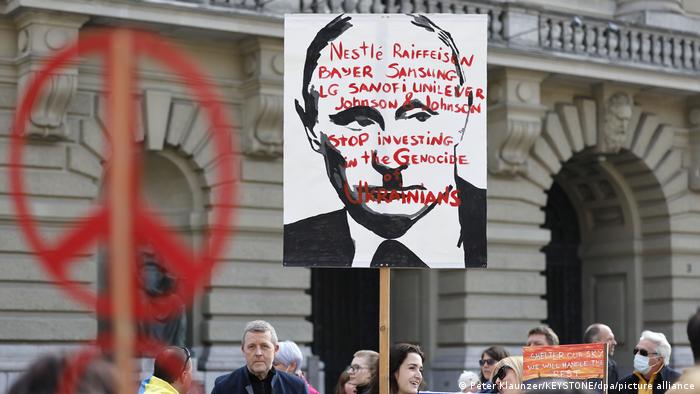 Numerous Western companies have already left the Russian market because of President Vladimir Putin's invasion of Ukraine. Investments worth billions that were built up over 30 years have been wiped out in a matter of weeks. The German Eastern Business Association is asking for financial assistance for the affected companies.

If at all, aid should only be granted to companies that have stopped doing business with Russia and left the market. There must be no state aid for companies such as Ritter Sport, Metro, Globus, Bayer, Henkel or Knauf, which continue to earn money in Russia. With their tax payments to Moscow, they are helping to finance Russia's inhumane actions and have become war collaborators. Just like the French companies Leroy Merlin, Total or Auchan.

These companies continue to cling to the Kremlin — often using flimsy excuses, such as responsibility to Russian employees, who are not personally to blame for the bloodshed.

But here's a question: Do they mean employees who, at least in large part, voted for Putin's regime? Or those Russians who support the so-called special operation in Ukraine? State propaganda cannot be used as an excuse for everything, because a good part of the Russian population supports Putin.

Companies that continue to engage in Russia face a moral dilemma: Do they continue to make profits and thus secure the company's economic future or accept losses and put jobs at risk?

But anyone who looks into the eyes of dying mothers in Mariupol or the hundreds of thousands of desperate children on the run should quickly realize what needs to be done: Economic pressure on Russia is not an end in and of itself. It serves the goal of ending the killing in Ukraine. Values such as humanity or respect for life cannot be had for free.

Western companies that want to stay in Russia also have a responsibility to their employees in Germany and the European Union. After all, who wants to work for a company that does business with war criminals? Therefore, sooner or later, all Western companies will leave Russia.

So far there have been no appeals in the West to boycott these very companies. But preparations have been underway for a long time. In addition, the Kremlin's counter sanctions are ensuring that Western companies have no future at all in Russia: Corporate profits can longer be exported in hard currency. And who needs worthless paper money with the word ruble on it?

Learning from the historical mistakes of others

It's also clear that with a cease-fire, for example, the economic conditions will become even worse. In order to survive, Putin must return to a planned economy, a total control of political, economic and cultural life. This will favor domestic companies, as it once did in the Soviet Union. Russia, which depends on the export of raw materials, will turn into China's cheap gas station. Beijing will uninhibitedly exploit Putin's empire — a process that could take decades.

In the meantime, there is little hope that Russians will somehow topple this regime. Anyone who believes that is naive and has never lived in Russia. The majority will retreat silently to their private lives or emigrate, just as in Soviet times. As long as every family has a dacha, no one will go hungry between Kaliningrad and Vladivostok.

Putin's dream of the renewed rise of the Soviet Union may come true for a few years. But Western companies should not contribute to this dream. Rather, they should learn from the historical mistakes of others: IBM and Ford did business with the Nazi dictatorship in Germany as late as 1938. Later, they had a lot of uncomfortable explaining to do.

This piece was originally written in German.

No more trade with Russia?