Opinion: An end, and something of a beginning

High-ranking Catholic officials have met in Rome to talk about sexual violence against minors, with the whole world watching on. The conference was exemplary and necessary, says DW's Christoph Strack. 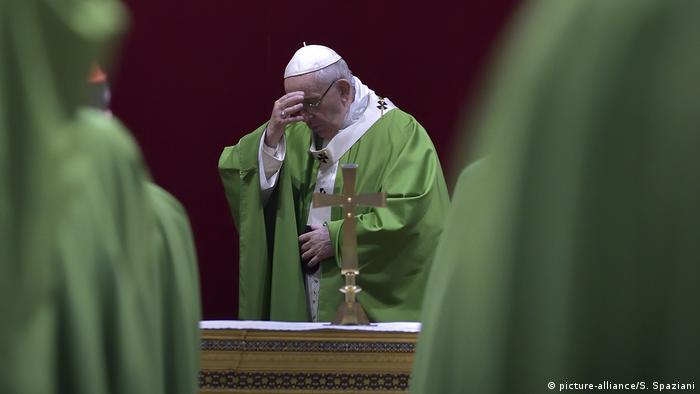 For four days, top clergy in the Catholic Church from across the world came together to talk about sexual violence within the church. And they did it in a highly transparent manner, with live broadcasts.

At the end, Pope Francis gave a major speech about the evils of sexually abusing children, about the dark, criminal aspects of the oh-so-wonderful internet, about sex tourism.

But one thing about this speech disturbed me to the core: The best place to have held it would have been a UN conference on the protection of children or a similar event. Here in Rome — after all that has happened and at the heart of the very church in which, as Francis himself recently said, sexual abuse still currently exists — the speech made a highly ambivalent impression.

To be sure, the pope called the abuse within the church "extremely grave and scandalous," compared the offending priests to "ravenous wolves" and "oppressors" and described them as "tools of Satan." He said he was sure that "God's people" and all believers would overcome this worldwide crisis in the church: "This very holy people of God will free us from the clericalism that forms a fertile ground for all these atrocities."

A few dozen survivors from Europe, Africa, Asia and North and South America who became victims of sexual abuse at the hands of priests as children were present during this conference in Rome — outside closed doors. They were unable to enter. The Polish delegation had enough connections to make it as far as the pope, and there is a harrowing picture of Francis kissing the hand of one victim. Others didn't make it into the Vatican. But they did receive confirmation that documents had been destroyed and that crimes had been covered up. Victims in Germany have been saying that for many years, but their accusations were mostly treated as merely bothersome.

Those who covered up such crimes — indeed, atrocities — should be named. And documents don't destroy themselves. All of these victims could hear a broadcast of the pope's speech. And it took minutes before he spoke for the first time about abuse within the church. The issue of compensation wasn't even mentioned at all. For some, that might be an aspect of marginal importance, while others see such payments as recognition of the fact that their lives have been ruined. It is not by chance that Catholic dioceses in the US are going bankrupt.

An end to delusions

So, in many ways, these four days in Rome are an endpoint. An end, at least, to some of the church's grand delusions. No one can say anymore that sexual violence within the church exists only in particular regions of the world. The cover-ups, crimes after the crimes, are also a phenomenon that occurs in the church worldwide. And no one can call into question the connection between abuse of power and sexual violence — and the church is too often a stronghold of the clerical abuse of power.

But will these days be a starting point as well? We can only hope they will be. Nothing that happened in Rome has any legislative consequences. During the discussions, Pope Francis presented a 21-point program. It could — as precisely such a starting point — be implemented by the bishops' conferences and Rome. Every bishop who was present at the conference on sexual abuse is now under an obligation.

Fear of the new?

Some days before the conference, Cologne's Cardinal Rainer Maria Woelki warned people not to expect too much and not to place too extensive demands for reform. "It is not our task to invent a new church now ourselves," he said. That sounded like fear of doing what needs to be done.

I had to think of this sentence in connection with several superb speeches given by women during the conference at the Vatican. It can be said that they were the best speeches delivered there. Certainly, none of the three women wants "to invent a new Church." But I bet that the speech by the Nigerian nun Sister Veronica Openibo would have received a spontaneous round of applause had it been given this Sunday instead of a sermon in a Catholic church in Germany or Europe.

Openibo may not want a new church and doesn't call for celibacy to be abolished, but she certainly wants to see her church renewed. "How could the clerical church have kept silent, covering-up these atrocities?" she asked. She spoke about the "misuse of power, money, clericalism, gender discrimination, the role of women and the laity in general," and criticized the fact that "[t]oo often we want to keep silent until the storm has passed! This storm will not pass by."

Yes, the conference in Rome has been an end and a beginning. An end to many of the church's fondest delusions about itself, which is at least something in a system predicated on constant and inert self-affirmation. The beginning may be a very hesitant one. And as the talks by the three women clearly showed, it will most likely come as the result of impetus from outside the clerical system.

Under the banners of accountability and transparency, Pope Francis has opened an unprecedented summit on sex abuse in the Catholic Church. He said that serial criticizers of the church were in league with the devil. (21.02.2019)