Pope Francis has promised to stop cover-ups of child sexual abuse in the Catholic Chuch "as was usual in the past." Francis said clergymen who should have spiritually guided children instead became "tormentors." 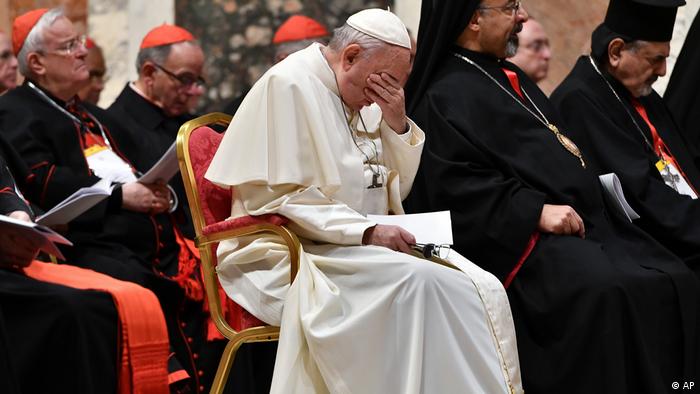 Pope Francis on Sunday vowed to bring an end to the practice of covering up child sexual abuse in the Catholic Church, as he addressed bishops at the end of a landmark summit to tackle pedophilia.

"If in the Church there should emerge even a single case of abuse — which already in itself represents an atrocity — that case will be faced with the utmost seriousness."

He called for an "all-out battle" against sexual abuse, which he described as abominable and said should be "erased from the face of the earth."

While child sex abuse gravely affected societies as a whole, "this evil is in no way less monstrous when it takes place in the church," Francis said.

He said the sexual abuse of children becomes even more scandalous when it occurs in the Catholic Church, "for it is utterly incompatible with her moral authority and ethical credibility," adding that children "instead of finding spiritual guides ... encountered tormentors" who abused their power.

Francis compared the sexual abuse of children to human sacrifice, saying: "I am reminded of the cruel religious practice, once widespread in certain cultures, of sacrificing human beings — frequently children — in pagan rites."

"Our work has made us realize once again that the gravity of the scourge of the sexual abuse of minors is, and historically has been, a widespread phenomenon in all cultures and societies," he said.

As Francis ended his talk he promised that the guidelines used by national bishops' conferences to prevent abuse and punish perpetrators would be reviewed and strengthened.