Opinion: After Würzburg - general suspicion and denial of reality

The reactions to the attack on train passengers near Würzburg by an Afghan refugee have again shown the deep division within the German society regarding Angela Merkel’s refugee policy, says DW's Felix Steiner. 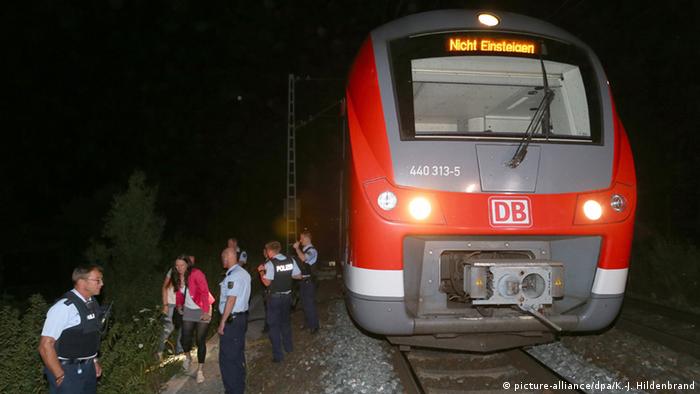 The regional train in Würzburg, where a young Afghan attacked passengers with an ax and knife.

There is actually a clear definition of terrorism: The systematic spread of fear and panic through violent actions.

That suggests that the axe and knife attack on a train near Würzburg maybe wasn't terrorism at all. It is known by now that the 17-year-old Afghan attacker had produced a video announcing to IS propagandists his plan to attack "unbelievers:" does that qualify his action as "systematic" although no terror organization had actually orchestrated it?

German media have been describing the event as an "attack," not a "terror attack." And the event seems even less like an orchestrated act of Islamist terror since there have been indications that the young man may have turned into a radical Islamist within only a few days after hearing about the death of a good friend back in Afghanistan.

But whatever the terminology may be: Many people see something systematic in the series of large and small attacks carried out without exception by Muslims. Many are afraid their own lives are at risk - and that's the very point of terrorism.

Fear breeds irrational behavior - social media make that abundantly clear. Many comments on the Würzburg attack blame Angela Merkel's September 2015 decision to open the borders to refugees. No matter that the young Afghan had already been in Germany for two years, and those who carried out attacks in Nice, Paris and Brussels were French and Belgian citizens.

General suspicion gets us nowhere

No matter whether there is valid criticism of the open border policy, it is not helpful to view all refugees, let alone all Muslims, with suspicion. Fear of new arrivals and Muslims who have lived here for years is a slap in the face to basic principles of liberal democracy. The integration process is crucial for our security and general suspicion will not help in achieving this goal. However, these considerations are too complex for social media, where mocking those who welcome refugees is much more fun.

There's a similar irrationality on the other end of the political spectrum. Anyone who dares point out that all attackers are believers of the same religion is labeled a Nazi, or at the very least accused of strengthening right-wing extremists. These people claim religion was no issue here, rather that the young man was traumatized by his refugee experience, and proper therapy could have prevented the attack. Average citizens can only look to these intellectual contortions with bewilderment.

The criminal as victim

The former Federal minister, Renate Künast of the pro-immigration Green Party, got the ball rolling just two hours after the incident, asking on Twitter why the police had to shoot rather than arrest the attacker. She made the remark without any detailed knowledge of the investigation and the situation at the scene of the crime. She simply presented the criminal as a victim, and the internet was all too happy to indulge in the back and forth.

Letters to the editor, reader commentary and social media clearly show how divided German society has become since last fall, more so than at any time in decades. The impact of a major terrorist attack in Germany is unthinkable. Nothing currently hints at the "united we stand, divided we fall" mentality of other nations.

If you would like to comment, you can do so below. The thread closes automatically 24 hours after publication of the article.

In the wake of the Würzburg train attack, police are focusing their investigation on an "unaccompanied minor refugee." There are tens of thousands of such refugees in Germany. Here's an overview of the key facts. (19.07.2016)

Opinion: Erdogan's influence on the German election 8h ago