Opinion: A chaotic and depressing non-debate

The first verbal clash between the US president and his rival produced no real exchange of ideas, as Trump interrupted Biden at every turn. We can do without such pseudo-debates, writes DW's Carla Bleiker. 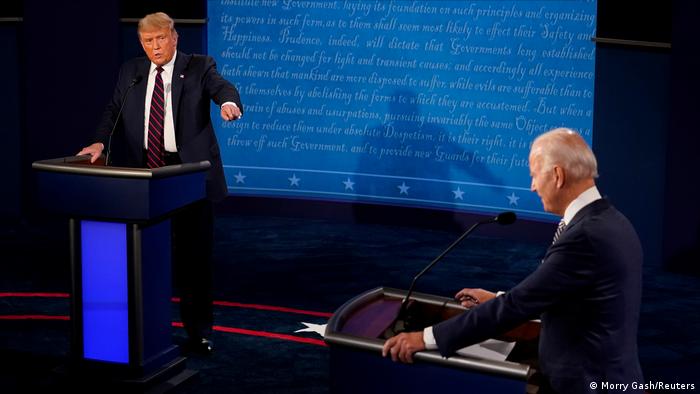 What exactly was that event broadcast on television on Tuesday? That's what many viewers are asking themselves following the first televised verbal sparring match between US President Donald Trump and his political adversary, Joe Biden.

What was supposed to have been an exchange of facts and ideas to win over undecided voters quickly deteriorated into something that resembled a no-holds-barred family argument between two old uncles who shouldn’t have been in the same room at the same time. While one of them refused to follow any rules at all, the other one smiled with increasing effort, shook his head, and did everything he could to prevent himself from screaming in frustration.

The United States is in a state of crisis, rocked by the coronavirus pandemic, natural disasters caused by climate change and a growing divide between Black and white Americans. But what one saw in the first direct exchange between the Republican and Democratic presidential candidates wasn't a president willing to tackle the problems of the day, but one unwilling to allow his political opponent to finish a sentence with interruption, while at the same time offering little by way of his own solutions to the country's many problems.

When moderator Chris Wallace reminded Trump that both he and his team had agreed in advance to abide by the rules of the debate, which included allowing his opponent to answer questions uninterrupted for the allotted two minutes, Biden remarked dryly, "He never keeps his word."

But that made it no less depressing to watch Trump unleash chaos during the 90-minute event without the moderator being able to rein him in.

Who needs such 'debates'?

But Biden also had moments where he was less than presidential. His referring to Trump as a "clown" was not appropriate behavior in such a context. And his attempt to explain how voters in different states should deal with their mail-in ballots turned into one of those confused, long, Biden-style sentences where the beginning has to very little to do with the end.

All the same, it was Trump who turned this debate into a fiasco, and neither Chris Wallace nor Joe Biden was very successful in preventing him from doing so. There was one time, however, that Biden's tone became severe enough to shut the president down at least for a second. That was while he was talking about his son Beau and his military service in Iraq, and Trump interrupted and tried to steer the conversation to Biden's other son, Hunter, and the allegations of corruption leveled against him.

If it isn’t possible to hold a real debate because one candidate doesn't let the other finish what he is saying over 90 minutes, what’s the point of the whole thing in the first place? The next such event will feature Vice President Mike Pence against his Democratic opponent Kamala Harris on October 7, followed by two further televised presidential debates between Biden and Trump.

It wouldn't be politically smart for Biden to withdraw from the remaining debates, as he could be written off as a political coward unwilling or unable to take up the political fight with the president. But after a catastrophic "debate" like the one on Tuesday, it would be very understandable if he did.

This article was translated from German by John Doyle

US: Man executed for 1996 murder after Supreme Court ruling 1h ago