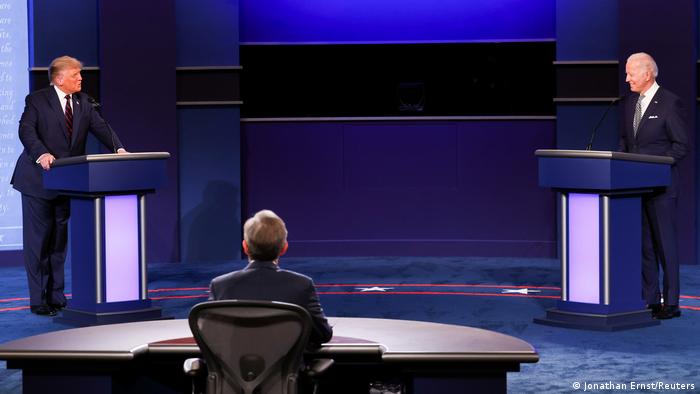 In recent times, no candidates in a US presidential election have clashed more aggressively in a debate. The TV duel, however, failed to produce a clear winner, according to the German daily Süddeutsche Zeitung.

"On the contrary: Both Trump and Biden were able to go home satisfied. For as far as the theatrical performance is concerned, both did their job properly. Donald Trump played Donald Trump, Joe Biden played Joe Biden, and the fans must have enjoyed it," the paper said.

Peter Beyer, the German government's coordinator for trans-Atlantic cooperation, says Trump appears to have come out slightly on top after the debate. Trump was more "aggressive" and "combative" than Biden, Beyer told the public broadcaster Deutschlandfunk on Wednesday morning.

The Democratic presidential hopeful, Beyer said, seemed at times too restrained and uncomfortable with Trump's "constant interruptions and verbal attacks." The duel was not a debate, but "bad entertainment," said Beyer.

But Trump, in his view, "clearly dominated" the event, because "he behaved so unpresidential, perhaps even almost dishonorably."

Beyer also said that the debate could have the effect of scaring away many undecided voters from casting their ballots in the November 3 election.

Andreas Nick, member of the German Bundestag's Foreign Affairs Committee and Chancellor Angela Merkel's conservative Christian Democratic Union, slammed the debate. Nick told DW that it was "an embarrassment in terms of the lack of decency, in terms of what it meant for the dignity of the presidency and of the democratic process" and "disturbing for voters in the United States, but also for friends and allies of the United States globally."

While German conservatives had "a lot of respect and trust for the democratic process in the United States," they were following the US election campaign "with a lot of anxiety," he added.

The Swiss daily Neue Zürcher Zeitung wrote that almost all observers agreed that the debate "did not leave a good impression overall." But Biden came out of it better than Trump, it said. "The 77-year-old was present, attacked the president where he is vulnerable — for example in the case of the coronavirus pandemic and health insurance reform — and did not have a massive blackout."

In Denmark, the newspaper Politiken wrote that the debate showed the "depth to which Trump is prepared to go" in the fight for the presidency. "Biden was clear, calm, mentally fresh and surprisingly aggressive," the paper said.

British daily The Times wrote that it was not a "debate in any meaningful sense."

"It was an ill-tempered and at times incomprehensible squabble between two angry septuagenarians who palpably loathe each other," it said, adding that the "clearest loser" from the debate "was America."

In Spain, leading daily El País wrote that the first debate was a "chaotic and nasty spectacle."

"This duel will not go down in history as one of the debates that ultimately determined the fate of an election, but as a sign of the hostile climate that prevails in the country five weeks before the election," it said. "Biden spoke more into the camera and tried to address the voters. Trump did the opposite with bad manners, in line with the expectations of his most loyal supporters."

"It was an angry exchange of words, but not much came out that might make investors change their mind one way or the other," said Simona Gambarini, markets economist at the London-based Capital Economics, referring to the US presidential debate.