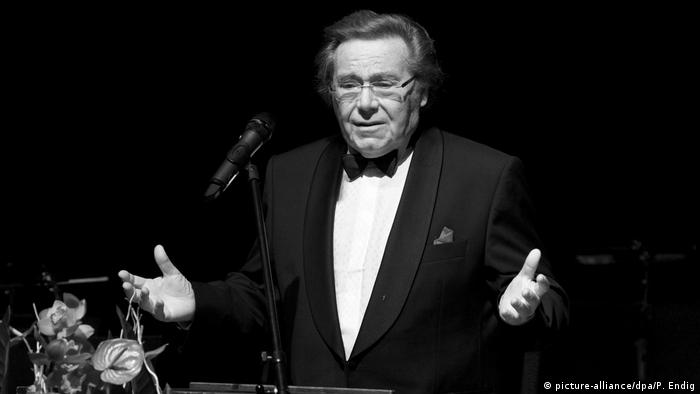 Schreier passed away on Christmas Day in his chosen home city of Dresden after a long period of illness, his secretary announced on Thursday, adding that his family had initially requested privacy.

As Tamino in Mozart's "Magic Flute" — a role he often performed — Schreier quit the opera stage in Berlin in 2000, citing stress, but remained an oratario singer and occasional master course tutor and conductor, despite back and cardiac ailments and a reported struggle with diabetes.

"A day without music is a wasted day," said Scheier, considered one of the greatest tenors of the 20th century.

Read more: Why the Salzburg Festival is in Salzburg

His final concert stage appearance was in 2005 during a performance of Bach's Christmas Oratorio in Prague, when he both conducted and also sang the role of the Evangelist.

He told German media at the time he was looking forward to his Dresden retirement with his wife Renate: "I've really sung enough and would just like to enjoy a few more peaceful years now."

Prompted by colleagues to conduct

Back in 1972, at the Staatsoper Berlin [Berlin State Opera], in the then-communist GDR [German Democratic Republic), colleagues had asked Schreier if he would also like to take up the baton.

That led to him conducting Vienna's Philharmonikern and New York Philharmonic orchestras.

Schreier remained Staatsoper ensemble member from 1963 until his farewell amid ovations in 2000.

Born in 1935 to a musical family in Gauernitz, a small town in Saxony, Schreier joined nearby Dresden's Kreuzchor boys' choir aged 8 and went on to study singing and conducting in the region's main city between 1956 and 1959. His father was a cantor.

His student graduation role was as First Prisoner in Beethoven's opera "Fidelio" in the Staatsoper Dresden. Schreier's breakthrough into international stardom came in 1962 as Belmonte in Mozart's "Abduction from the Seraglio."

He made guest appearances as a sought-after tenor at Vienna's Staatsoper from 1966, New York's Metropolitan Opera in 1968, Milan's Scala from 1969 and at Austria's Salzburg Festival.

As GDR "export star" he enjoyed rare travel privileges in the tightly-controlled GDR but reputedly without ever becoming a member of the communist SED party — a necessity for most East Germans who hoped to travel.

Despite offers to move to the West before and after the Berlin Wall fell, he responded: "I would be missing something if I couldn't live in Dresden."

In 2011, the city of Leipzig awarded Schreier its Internationaler Mendelssohn-Preis — along with the German-Polish literary critic Marcel Reich-Ranicki, who passed away in 2013.

Celebrating his 80th birthday in 2015, Schreier as former tenor said: "I'm satisfied with my life and enjoy retirement."