Over 200 migrants have disembarked the humanitarian vessel Open Arms off the coast of Sicily and are undergoing quarantine. About a hundred migrants have died in the Mediterranean Sea this week alone. 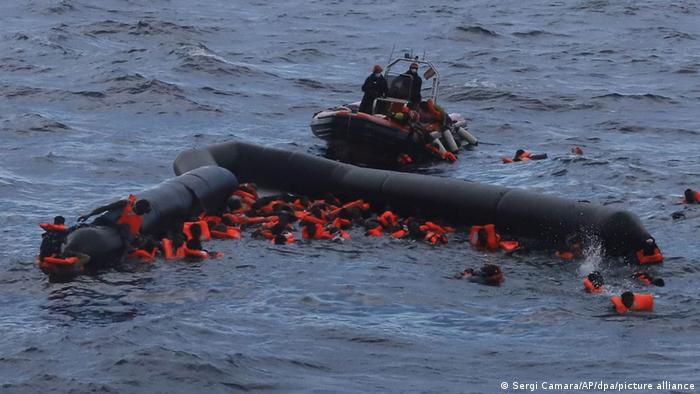 The migrant rescue ship Open Arms on Saturday transferred 255 migrants to Italian authorities in Sicily after the Spanish NGO noticed their boats in distress in the Mediterranean Sea earlier this week.

Open Arms said a total of 184 adults and 71 unaccompanied minors from 20 African nations were taken aboard two Italian boats where they must first undergo quarantine and ensure they are not carrying the coronavirus.

"We hope the EU treats them better, " the group tweeted.

Read more: Lesbos: Is another Moria in the making?

At least five other migrants had died while making a similar journey on Thursday after an overcrowded rubber dinghy crammed with more than 120 people capsized off the coast of Libya, the NGO reported. The dinghy had left from the Libyan town of Khums.

Fisherman and coast guards had recovered 31 bodies earlier this week, including that of a toddler.

A video by Open Arms showed a Guinean mother crying out for her 6-month-old baby who died in one of the wrecks, despite efforts from the medical team aboard the humanitarian ship.

The woman in the video can be heard screaming, "Where is my baby!"

About 100 people drowned on Thursday alone.

Appeal to EU to act

Since the beginning of 2020, around 30,000 refugees arrived in Italy by boat, according to the Italian Interior Ministry, three times as many in the comparative 2019 period.

People, often fleeing war or poverty, seek to reach Europe via boat. Many embark from Libya or Tunisia.

"We reiterate our call on the international community and the EU to take urgent and concrete action to end the cycle of return and exploitation," Msehli tweeted.

Open Arms is the only aid organization currently operating in international waters off the Libyan coast to rescue distressed migrants at sea.