A German-flagged NGO rescue ship carrying 40 migrants has been given the all-clear to dock in Malta. The vessel Alan Kurdi set sail for the Mediterranean island group after being turned away by Italian authorities. 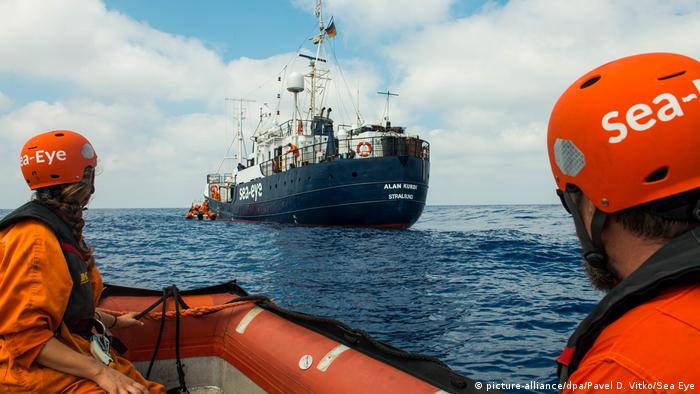 Maltese Prime Minister Joseph Muscat announced Saturday that 40 migrants aboard the NGO ship Alan Kurdi would be allowed to disembark in Malta, following a request from Germany.

The announcement came after Italian authorities at Lampedusa denied the rescue ship permission to enter the port earlier this week. The German NGO Sea-Eye, which operates the Alan Kurdi vessel, then appealed to Malta.

"Malta will allow 40 migrants on German vessel Alan Kurdi to transfer to Armed Forces of Malta asset, enter port. German government and EU Commission arranged for all persons to be distributed amongst number of EU member states," Muscat wrote on Twitter.

He did not specify which countries would take the migrants in, but said they would not remain in Malta.

The migrants have been at sea since Wednesday night, when they were rescued by the Sea-Eye ship off the coast of Libya.

The European Union is struggling to deal with the large numbers of people fleeing conflict or poverty in their home countries and seeking asylum in Europe via the dangerous Mediterranean sea route.

Italy, Malta and Greece, the EU countries closest to Libya, have borne the brunt of this mass influx.

Italy's far-right deputy prime minister and interior minister, Matteo Salvini, has insisted that Italy cannot accept any more migrants. In recent months he has barred several rescue ships from docking until it has been made clear how the migrants will be redistributed among EU states. Italy's blockade has led to hundreds of rescued migrants heading to Malta instead.

Also on Saturday, two heavily pregnant women rescued off the Libyan coast by Spanish NGO Proactiva Open Arms were taken to safety by the Italian coast guard, spokesman Oscar Camps said on Twitter. One of the women had gone into labor.

The Proactiva ship is still searching for a port to take in a remaining 124 migrants after Salvini signed an order barring it from entering Italian waters.