Tienchi Martin-Liao, president of the Independent Chinese PEN Center, a position that Liu Xiaobo has also held, has her own thoughts. 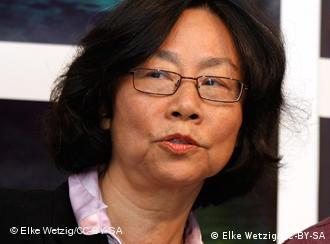 Today is the day when Liu Xiaobo receives the Nobel Peace Prize. In its one-hundred-year history, this is the first time that the prize is awarded to a Chinese citizen. Yet, the laureate, his family members, and even close friends are incarcerated in their own country. No one can come to receive the award.

The Scottish PEN has produced a "Liu Xiaobo chair", which has been sent over to Oslo. Now it stands in the city hall. This empty chair is a reminder that its owner, who should enjoy the highest international honor today, is absent from the ceremony, banquet and concert, which are devoted to him.

The host country's king, the queen, European royal families, foreign ambassadors and representatives, as well as guests from overseas gather in the bright hall decorated with flowers and make a toast to Xiaobo. But many of us are still melancholy, and we ask, where is Liu Xiaobo and his beloved Liu Xia?

Let us travel through time and space and visit Liu Xia first.

We are in Haidian District, Beijing, Yuyuantan South Road number 9. From a distance one can see the white building where the Lius live. The police cars are parked in front of the house; several policemen parade around. Journalists from far and near are cordoned off some hundred meters away. No one is allowed to get into the forbidden zone.

Thin, with a shaven head (or short-cropped hair), Liu Xia is sitting alone in the empty home.

Aside the table you sit

Looking at the cup in front of the empty seat

Stare at the cup, listen

Is there the move of key in the hole

The cup in the hand, you take a sip
Lifted the cup to the sun
Cup and your fingers

Penetrated by the sun
Palm was stained by the transparent green

Delicate
A hint of panic is there too

Till the man opens your door

(From Liu’s poem "Sunshine and Cups - to my Little Finger, who drinks tea every day")

Liu Xia may wait for a long time, maybe another ten years.

Now we visit Xiaobo in Jinzhou prison in the small Chinese town Nanshan in Liaoning Province. Entering the gate, we see several scattered buildings. Surprisingly, we see a huge office wall on which is written boldly '1984'. A few months ago, Liu Xia, accompanied by the Stainless Steel Mouse Liu Di, Wang Jinbo, Mo Zhixu and Wang Zhongxia, came here for a visit. They were amazed at Orwell’s rebirth in a Chinese prison. Snickering, they took pictures in front of the "1984 wall". Several officers rushed to them and took them into custody. Separately, they were interrogated for hours.

We enter Xiaobo’s cell now. He shares with five other prisoners a 3 by 4 meter space. His head is bald, shaved like an ordinary criminal. His body is swollen by the padded jacket and trousers. Scarf, hat and gloves are a must in the cell because the concrete floor of the prison is cold. The small window beneath the high ceiling is always open. In winter, the indoor temperature is higher than outdoors; it is a few degrees above zero. The odor of the open toilet bucket in the corner is neutralized by the cold air, but one cannot ignore the stench of the daily waste of several men. The smell not only fills the room, it penetrates through clothes, and into the pores of the skin.

This is the first winter that Xiaobo spends in a prison in northern China. He will have to adjust himself to the circumstances. He does not know whether he will have frostbite. To sit and lie on the concrete floors all year round may cause neck and spine pain and lead to kidney problems. His stomach disease has given him a hard time since his imprisonment.

Xiaobo has exited his cell today, but he does not want to show it to others otherwise his cell-mates might become cynical and angry. Sitting there, his thoughts fly to Oslo. He has had constant dreams about it. Who will be there at the ceremony? Who will receive the prize for me? It could not be Liu Xia. She has not sent any sign of life for a while. My acceptance speech is long written in my head, but who can read it out aloud for me? Does the King wear a majestic tuxedo, and the Queen her crown at the banquet? Will the distinguished guests think of the dead in Tiananmen Square and the Tiananmen mothers and make a toast?

Sitting in the dungeon, Xiaobo does not know that the announcement of his award induced a tsunami in Zhongnanhai, and the rulers had a mild concussion, followed by delusions: they believe that their enemies are all over the world, so the grip on the naughty writers and the guy who held the crab dinner party must be tightened. They must not go outside the country, otherwise they could endanger national security.

Liu Xiaobo’s dinner on December 10, 2010 may look like this: boiled vegetables with sand, and a few pieces of fat meat as a special treat. He might have an extra piece of steamed bread, and his rice bowl could also be refilled today. In short, it is a privileged meal that will long be remembered, because it is a meal that will leave the stomach truly filled. After all, he is the first Chinese to win the Nobel Peace Prize.

Nobel winner Liu Xiaobo's seat won't be the only empty one on Friday when the prizes are awarded in Oslo. After pressure from China, 20 nations have said they won't be attending the ceremony. (09.12.2010)

Human rights group Amnesty International organized demonstrations at the Chinese embassy in Oslo on Thursday, as China stepped up its criticism a day ahead of a ceremony honoring jailed dissident Liu Xiaobo. (09.12.2010)

This year's Nobel Peace Prize laureate is detained Chinese civil rights activist Liu Xiaobo. Prior to the ceremony on Friday in Oslo, the Chinese authorities have tightened their grip on dissidents. (06.12.2010)

Pictures of the Nobel Peace Prize ceremony 2010 held in Oslo.

Two years after Ethiopian Prime Minister Abiy Ahmed was awarded the Nobel Peace Prize, his country is engulfed in a war with the potential to destabilize the whole region for decades to come, says DW's Ludger Schadomsky.