Liu Xiaobo is the winner of the 2010 Nobel Peace Prize. The 54-year old, who has dedicated his life to the fight for more civil rights in China, has been declared an enemy of the state. 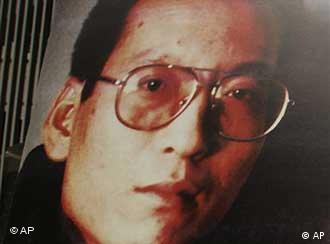 Liu Xiaobo has been known as one of the most prominent critics of the Chinese regime for decades. The civil rights activist has been in jail for nearly two years now. This is not the first time that he has been locked up - the first time was after the bloody crackdown on the Chinese democracy movement in 1989. 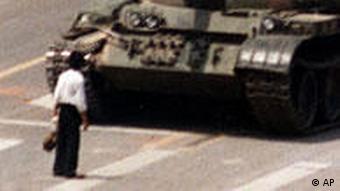 1989: a student blocks a line of tanks near Tiananmen Square

"I was on my bike home. It was about midnight. A car was following me and forced me to stop. A couple of people came out," Liu recalled in a 2007 interview with Deutsche Welle. "They blindfolded me, tied me up and pushed me into the car. I was really scared. I thought that they would take me somewhere and just shoot me."

'Duty' to fight for justice

Liu Xiaobo, who had studied literature, had taken the side of the Chinese students fighting for more democracy on Tiananmen Square in 1989. After two years in jail, his will to fight was still not broken. Again, he was detained in 1995 and 1996. But he continued the struggle, explaining, "Many innocent people were killed during the Tiananmen massacre. I believe that it is my duty to fight for justice to those who gave their lives. It is a duty that I cannot abandon," he said.

In late 2008, Liu Xiaobo was arrested once more. He had been one of the main initiators of the so-called 'Charter '08' manifesto, which was published on the 60th anniversary of the Universal Declaration of Human Rights. The manifesto called for political reforms in China, including a system of checks and balances, freedom of speech and a competitive multi-party democracy. As many as ten thousand intellectuals and academics have signed the petition so far. 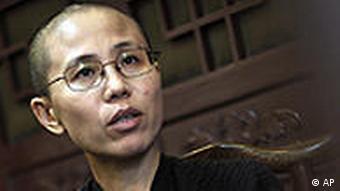 "Many in his position would have given up. But Xiaobo has the mental strength. If he believes in a goal, he'll try to reach that goal by all means, even if he knows that he will never be able to reach it," Liu Xia, his wife, had said in an interview. "He can be really stubborn." She had had an uneasy feeling and sensed that the Communist Party would let her husband pay dearly for the Charter '08.

In December 2009, a Chinese court sentenced Liu Xiaobo to eleven years in jail on subversion charges. In 2007, he had already anticipated what could happen to him.

"I’ve once said that it is a dissident’s professional hazard to lose his freedom and being under surveillance. It is part of a dissident’s job," he told Deutsche Welle. "It is your own choice. You can do other things, be a salesman or a teacher, and earn easy money. But as soon as you decide to be a dissident, you should withstand pressure with optimism, self-confidence and composure."

Liu Xiaobo is serving his sentence in a detention facility 500 kilometers northeast of Beijing. Once a month he is allowed to receive visitors.

The Chinese authorities have harshly protested against the pro-democracy activist receiving the Nobel Peace Prize. The executive secretary of the Norwegian Nobel Committee Geir Lundestad reported that the Chinese government explicitly threatened the committee not to give the prize to Liu. The decision would have a negative impact on Chinese-Norwegian relations, Beijing said.

Liu had also anticipated this kind of a move: "Some European politicians fear that a discussion about human rights can have a negative impact on their economic relations with China. I don’t think so. The political relationship between China and Japan is full of tensions. But China's trade relations with Japan are among the largest with any country. So you can see that both these two things do not have anything to do with each other."

This year's Nobel Peace Prize laureate is detained Chinese civil rights activist Liu Xiaobo. Prior to the ceremony on Friday in Oslo, the Chinese authorities have tightened their grip on dissidents. (06.12.2010)

Incarcerated in China for his subversive political activities, writer and Nobel Prize-winner Liu Xiaobo has received a special award from the German PEN committee in honor of his achievements. (16.11.2010)

A Chinese democracy activist called for immediate release of Liu Xiaobo at the World Summit of Nobel Peace Prize Laureates. (12.11.2010)