Pope Francis has met with victims of sexual abuse by priests in Chile and apologized for the "irreparable damage" they suffered. He said the Church was committed to "ensuring that such things don't happen again." 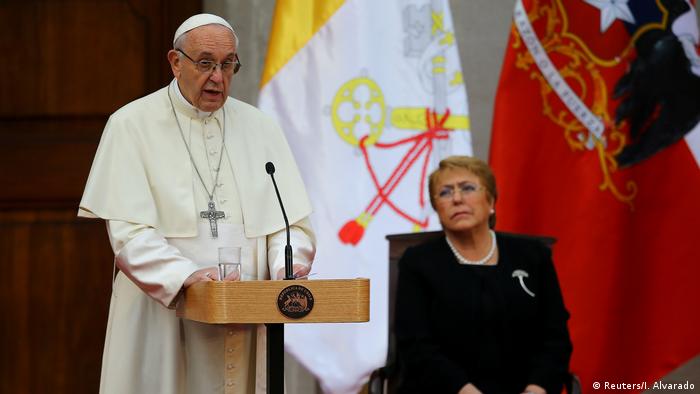 On Tuesday, the first day of a week-long Latin-America trip, Pope Francis asked "for forgiveness" for the "irreparable damage" done to children who were raped and molested by Catholic priests in Chile.

The pontiff met with a small group of abuse survivors at a "strictly private" gathering at the Vatican's Apostolic Nunciature embassy in the capital, Santiago, the Vatican said.

Francis listened to their stories, "prayed with them and wept with them," spokesman Greg Burke told reporters.

Earlier in the day, the pontiff made his first public remarks about abuse in a speech at La Moneda presidential palace.

Addressing Chilean President Michelle Bachelet, lawmakers, judges and other authorities, the pope said he felt "bound to express my pain and shame" that some of Chile's clergy had sexually abused children who were in their care.

"I am one with my brother bishops, for it is right to ask forgiveness and make every effort to support the victims, even as we commit ourselves to ensuring that such things do not happen again," he said.

His comments came as the number of Catholic churches that have been attacked in Chile in the past week rose to eight. Scuffles broke out between riot police and protesters who had gathered outside the Santiago park where Francis celebrated Mass with some 400,000 people on Tuesday morning.

Pope Francis made no direct mention of Fernando Karadima, the country's most notorious priest, who was sanctioned by the Vatican in 2011 to a lifetime of "penance and prayer" for sexually molesting minors.

He also did not mention the fact that the emeritus archbishop of Santiago knew of complaints against Karadima — a charismatic and well-connected priest — but did not remove him from ministry.

Accusations from victims emerged in 2010 after people had been complaining for years to church authorities that Karadima had kissed and fondled them when they were teenagers.

The scandal rocked the Catholic Church and greatly hurt its credibility, and many Chileans are still angry over Francis' decision, in 2015, to appoint a protege of Karadima as bishop of the southern city of Osorno.

Bishop Juan Barros has denied knowing about Karadima's abuse, but many Chileans don't believe him, and his appointment has badly split the diocese.

Pope Francis is due to meet with members of Chile's persecuted Mapuche community in the southern city of Temuco on Wednesday.

Pope Francis is set to visit Chile and Peru on his sixth trip to Latin America. In both countries, the Catholic Church is mired in scandals, and the political situation isn't much better. Dario Menor reports from Rome. (15.01.2018)