Bernard Law, the former archbishop of Boston, has died in Rome. Law became a central figure in the clergy's sex scandal after it emerged he had failed to alert police over pedophile priests. 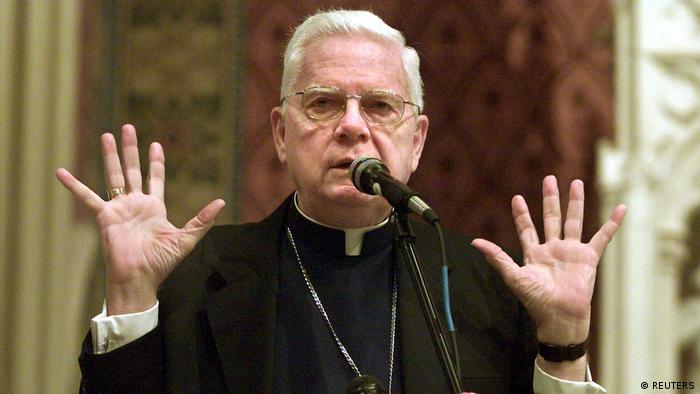 The Vatican announced that Cardinal Bernard Law, who resigned in disgrace from the Boston archdiocese in 2002, had died Wednesday morning in Rome.

Although the Vatican declined to give a reason for Law's death, the former archbishop had reportedly been suffering from complications of diabetes, liver failure and a build-up of fluids around the heart.

Pope Francis is set to deliver the funeral rites for Law at 3:30 p.m. (1430 GMT) on Thursday in St. Peter's Basilica, as is the custom for all Rome-based cardinals.

Francis sent his condolences in a telegram to the dean of the College of Cardinals, Cardinal Angelo Sodano, writing: "I raise prayers for the repose of his soul (...) I send my apostolic blessing to those who share in mourning the passing of the cardinal."

The Pope's message made no mention of Law's role as the former archbishop of Boston or the sex abuse scandal. Instead, the telegram referred to his final position as archpriest of the St. Mary Major basilica in Rome.

Bernard Law was appointed in 1984 by Pope John Paul to the Boston archdiocese, one of the most prestigious and wealthiest in America. However, he was forced to resign in 2002 after it emerged that he had allowed hundreds of instances of child sexual abuse to go unpunished. The scandal sent ripples across the nation and cost the American church around 3 billion dollars in legal fees.

The scope of revelations uncovered by the Boston Globe newspaper saw Law become the face of the Roman Catholic Church's sexual abuse scandal.

Among the biggest controversies uncovered by the newspaper's investigative Spotlight team was the fact that Law had moved predator priest John Geoghan between different Massachusetts parishes despite knowing that he had abused some 130 children.

Law had also allowed priest Paul Shanley to continue working with children despite being aware that he faced dozens of accusations of abuse.

Both priests were respectively sentenced to between nine and 10 years, and 12 and 15 years in prison. Law, however, never faced criminal charges.

The Globe's report on the scandal was awarded the prestigious Pulitzer Prize for journalism, while the story behind the investigation was adopted into an Oscar-winning film in 2015.

After resigning amid public outcry in 2002, Law relocated to Rome to serve in a low-key position in a basilica. Despite the move representing a huge fall from grace within the Catholic Church, the appointment was widely condemned by the public.

Five years after the exposure of the German sexual abuse scandal affecting schools and Catholic institutions, victims are calling for an independent committee. They claim that important issues are still unresolved. (30.01.2015)