The Euro 2020 qualifier between Bulgaria and England was marred by racist comments and gestures from home fans in Sofia. England ultimately won the match 6-0, edging closer to qualification. 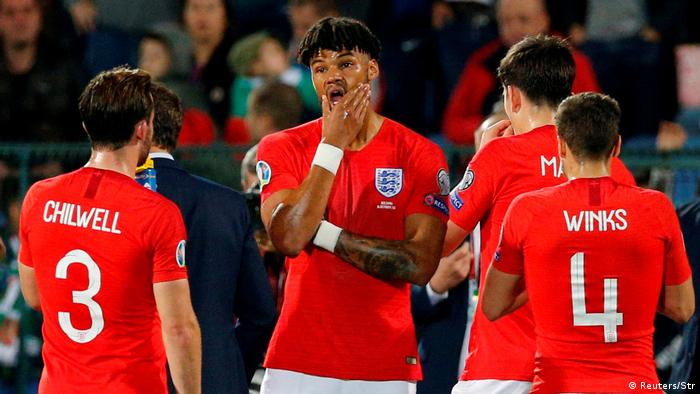 Match officials in Sofia, Bulgaria, had to twice stop a Euro 2020 qualifier between Bulgaria and England on Monday night due to racist taunts by the home fans.

A large section of the stadium was empty, as punishment for previous racist behavior. But that didn't stop a group of fans from hurling offensive chants and making fascist gestures.

England's black players Raheem Sterling and Tyrone Mings were among those targeted, with fans making monkey noises each time they had the ball. Others were also seen performing Hitler salutes.

Football fans from across the world have taken to social media to vent their outrage. Bulgarian fans attempted to apologize for the behavior of their compatriots in the stands.

Bulgaria's captain, Ivelin Popov, spent halftime trying to convince the home fans to simmer down. Several were removed before play resumed, but uncertainty over whether the game would be suspended or not lingered throughout the match. 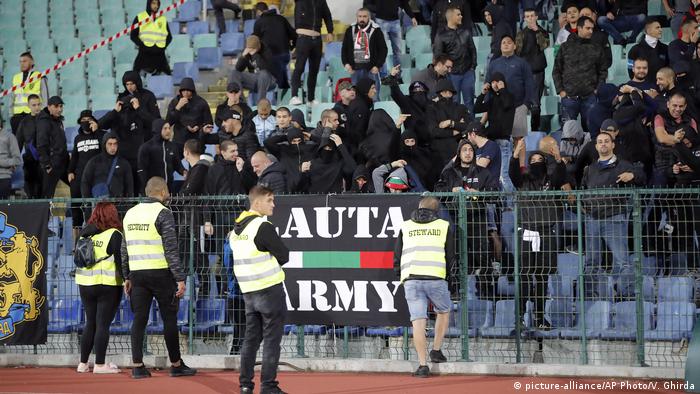 "We reported everything immediately when we heard things," said England coach Gareth Southgate. He spoke with players at halftime to let them know they had the option to not continue the match in protest of the abuse.

Ultimately, the situation improved in the second half and England stayed in the game, delivering a commanding 6-0 victory over the hosts. The win put England closer to the goal of qualifying for the European championship next year.

"We know it's an unacceptable situation. I think we've managed to make two statements, really, by winning the game but also we've raised the awareness of everybody to the situation," Southgate said.

The English Football Association (FA) released a statement condemning the abuse and said it would petition European football's governing body UEFA to "investigate as a matter of urgency."

"There is no place for this kind of behavior in society, let alone in football," the FA said in a tweet. 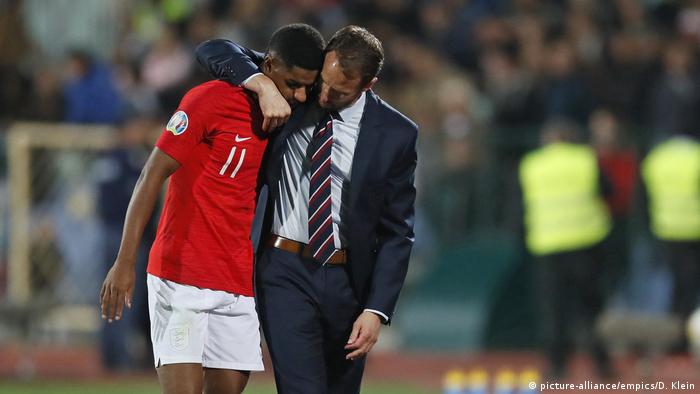 But Bulgarian coach Krasimir Balakov and several of his players said they did not hear any racist abuse directed toward the England team. "The crowd was behaving well, I have not heard any insults," said goalkeeper Plamen Iliev.

"It's quite disappointing to focus on racism. It's not serious to concentrate on that if there's a qualifier like this and we're playing against a team like England," he said.

Chemnitz FC has threatened to consider legal action after its own fans chanted anti-Semitic slogans at a Munich away game. The club is in a running conflict with the far-right contingent among its supporters. (25.08.2019)

The German football association said Tönnies "convincingly showed that he was not a racist." But unlike his club Schalke, the DFB said Tönnies' comments on climate and African wood-burning and birth rates were racist. (29.08.2019)