US President Barack Obama has reported on the progress against the so-called "Islamic State" militant group, but warned of further small-scale attacks. He also criticized Russia for not taking "necessary steps" in Syria. 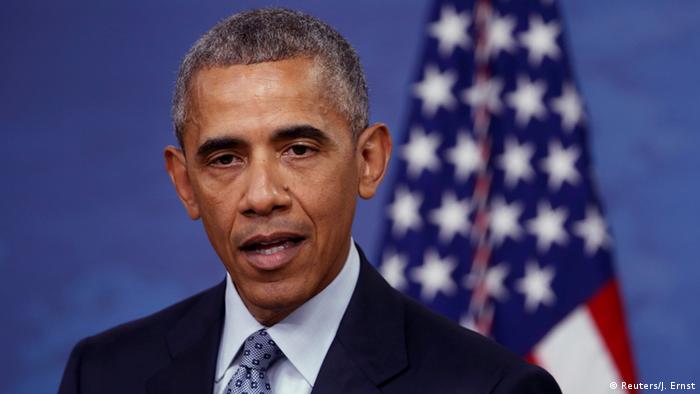 At a press conference on Thursday at the Pentagon, US President Barack Obama said that two years of the US-led air and ground campaign against the "Islamic State" (IS) militant group in Syria and Iraq had shown it could be beaten in conventional military combat.

"I am pleased with the progress that we've made on the ground in Iraq and Syria," Obama said, but added: "We're far from freeing Mosul and Raqqa."

Obama turns up pressure on Putin over Syria

Obama also cautioned on working with Russia. "The US remains prepared to work with Russia to try to reduce the violence and strengthen our efforts against ISIL and al Qaeda in Syria, but so far Russia has failed to take the necessary steps," Obama said, using an alternative acronym for the militant group.

He added that he was not confident Russia or its president, Vladimir Putin, could be trusted.

Obama defends US payment to Iran

The US president has rejected criticism over a $400 million payment to Iran, a move described by Donald Trump as a "ransom." Barack Obama said the lump sum was negotiated separately from a recent nuclear deal. (04.08.2016)

New mission for Germany's Bundeswehr in a time of terrorism?

Defense minister Ursula von der Leyen has paid a visit to the "Command Center for Territorial Missions" in Berlin. She underlined the Bundeswehr's readiness to assist police during domestic terror attacks. (03.08.2016)

Syrian jihadi rebels have launched an offensive to end a regime siege in the city of Aleppo. The eastern part of Aleppo, still home to tens of thousands of civilians, has been cut off from supplies for nearly two weeks. (01.08.2016)

Speaking to the press on his birthday, Obama said IS still had the ability to carry out damaging small-scale attacks.

"What ISIL has figured out is that if they can convince a handful of people or even one person to carry out an attack on a subway, or at a parade or some other public venue, and kill scores of people as opposed to thousands of people, it still creates the kinds of fear and concern that elevates their profile," he said.

The president said the US had to improve its operations in disrupting terror networks and intercepting online messages to troubled individuals which were encouraging them to act.

"Those networks are more active in Europe than they are here, but we don't know what we don't know, and so it's conceivable that there are some networks here that could be activated," he said, while warning against over-reacting to such attacks.

"They've seen the degree of attention they can get with smaller-scale attacks using small arms or assault rifles," Obama said. "The possibility of either a lone actor or a small cell carrying out an attack that kills people is real."

Over the last month, IS has claimed responsibility for several attacks against civilians in France and Germany.

"How we react to this is as important as the efforts we take to destroy ISIL, prevent these networks from penetrating," Obama said. "When societies get scared they can react in ways that undermine the fabric of our society."

Obama celebrated his 55th birthday on Thursday at a restaurant on the Georgetown waterfront. Obama and his family leave on Saturday for their summer vacation, spending a fortnight at Martha's Vineyard in Massachusetts.