The US president has begun his campaign to convince lawmakers and the public that diplomacy with Iran is the best course. He stressed that the nuclear deal was not based on trust, but on "unprecedented verification." 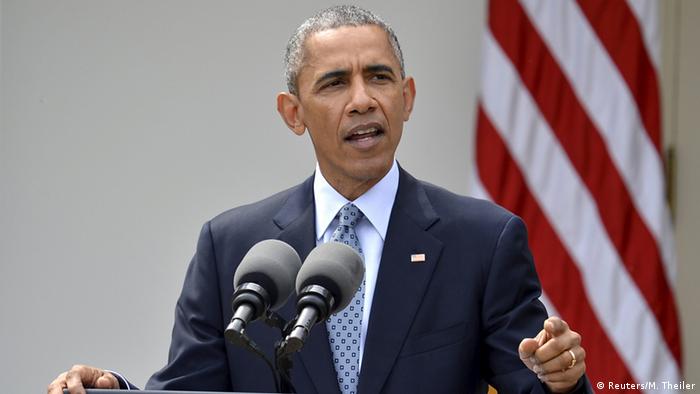 In his weekly address on Saturday, US President Barack Obama began his campaign to assure Americans and sway skeptics that the framework for a nuclear pact with Iran was a "good deal." A day after Obama called top lawmakers to urge support for the agreement, he pressed his case that Iran would not be able to build nuclear bombs.

"It's a good deal, a deal that meets our core objectives, including strict limitations on Iran's program and cutting off every pathway that Iran could take to develop a nuclear weapon," Obama said in his radio and Internet broadcast on Saturday.

"The deal denies Iran the plutonium necessary to build a bomb," he added, emphasizing the importance of transparency measures that would place Iran's nuclear program under intense scrutiny for at least twenty years.

"If Iran cheats, the world will know it. If we see something suspicious, we will inspect it. So this deal is not based on trust, it's based on unprecedented verification."

The White House is hopeful that popular support could help convince those in Congress who are against the deal. President Obama completed calls to John Boehner, the Republican Speaker of the House of Representatives, as well as Republican Senate Majority Leader Mitch McConnell on Friday afternoon, who have previously sided with Israeli Prime Minister Benjamin Netanyahu in condemning the deal with Iran.

Some Iranian hardliners were also very much against the agreement:

The framework agreed to on Thursday, which is a preliminary outline ahead of a more concrete deal to be reached in June, represented the end of a 12-year international crisis over Iran's nuclear program. The deal will see sanctions against Tehran rolled back in exchange for a reduction of centrifuges used for enriching uranium.

"Success is not guaranteed," President Obama concluded, "But today we have an historic opporunity to prevent the spread of nuclear weapons in Iran, and to do so peacefully, with the international community firmly behind us."