Israel's prime minister has said that any final agreement with Iran over its nuclear program must enshrine "Israel's right to exist." Seven world leaders have agreed the outlines of the deal after months of talks. 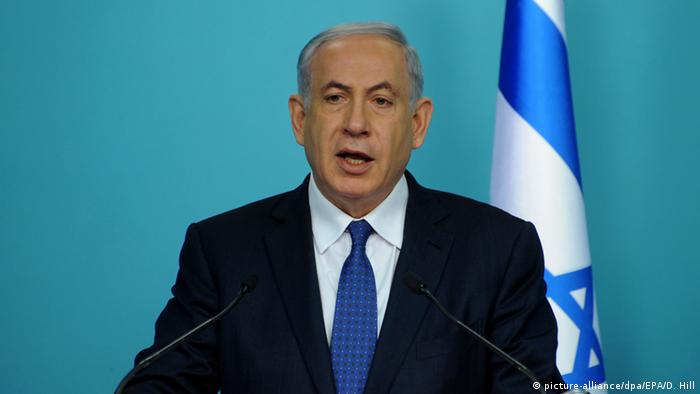 Following a meeting with his security cabinet on Friday, Israeli Prime Minister Benjamin Netanyahu said he and his cabinet were "united in opposition to the proposed deal" on curbing Iran's nuclear program, which was announced on Thursday.

Throughout months of talks, Netanyahu has vehemently opposed the negotiations, demanding instead that Iran's nuclear program be dismantled.

The Israeli prime minister argues that Iran cannot be trusted and that leaving certain facilities intact will enable Iran to eventually build a nuclear bomb.

"And it might very well spark a nuclear arms race throughout the Middle East and it would greatly increase the risks of terrible war," Netanyahu said on Friday.

Iran, however, has continued to deny the allegations, insisting that it is developing a nuclear program only for peaceful purposes.

Speaking on the eve of the Jewish holiday of Passover, Netanyahu also demanded that any nuclear agreement signed with Iran must endorse Israel's right to exist.

While calling the emerging deal a bad one, Netanyahu said the choice was not only between a bad deal or war.

"There is a third alternative - standing firm, increasing the pressure on Iran until a good deal is achieved," the Israeli prime minister said.

Following the announcement of the emerging deal on Thursday, US President Barack Obama welcomed the "historic understanding" with the Islamic Republic, which could prove to be major breakthrough in the 12-year standoff between Iran and the West if the highly complex agreement were to be finalized.

In Iran, the mood was also one of celebration with hundreds of Iranians taking to the streets in the capital where drivers were also heard sounding their horns in approval.

Iran and the six world powers involved in the talks now face a June 30 deadline to reach a final deal.

There has been a mixed reaction to the framework for a nuclear deal between Western powers and Iran. The US has welcomed the move, but Israel has warned its survival could be at risk under a future pact. (03.04.2015)