World powers and Iran have been finalizing a joint statement at the talks in Lausanne. More than two thirds of Tehran's enrichment capacity will be decommissioned and monitored for 10 years. 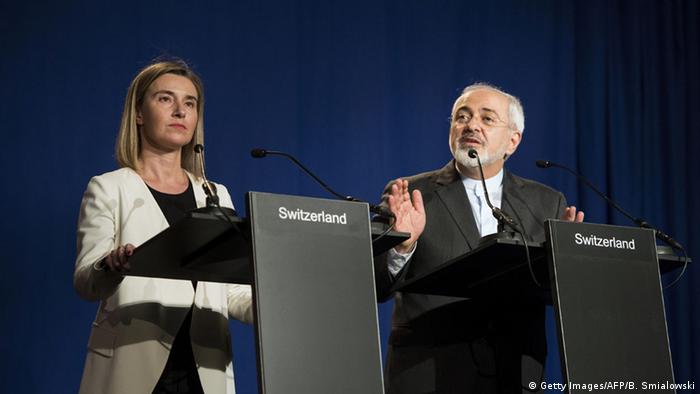 The United States, Iran and five other world powers have reached an understanding that will direct them toward achieving a comprehensive nuclear agreement within three months.

"A decisive step has been achieved," EU foreign policy chief Federica Mogherini said while reading out a joint statement in the Swiss city of Lausanne.

US Secretary of State John Kerry and the top diplomats of Britain, France and
Germany also briefly took the stage behind them.

Kerry tweeted there was a deal "to resolve major issues on nuclear program. Back to work soon on a final deal."

Appealing to members of US Congress who are asking for stronger sanctions against Iran, Kerry asked that they "continue to give us time and space that we need to fully explain the political agreement we have reached."

Iran needs to slash the number of centrifuge uranium enrichment machines to 6,000 from 19,000 at present. This will include around 1,000 centrifuges, which can make nuclear material for power generation but also for nuclear weapons, at the Fordo site.

Global powers hope that this will make it impossible for Iran to make nuclear weapons under the guise of its civilian program and end a crisis raging for 12 years. Different restrictions on Tehran's nuclear program would continue for a quarter century.

The final deal, which is to be concluded by the end of June, will limit Tehran's uranium enrichment program and its nuclear research and development program. In return for compliance, international sanctions will be lifted. This is part of a preliminary political understanding reached on Thursday between Iran and the six world powers.

Iranian President Hassan Rouhani said the drafting of an agreement would begin immediately, after marathon talks in Lausanne.

Reaching a nuclear deal with the six major powers will not mean normalizing of ties with the United States, Iran's foreign minister stressed.

"Iran and US relations have nothing to do with this… We have serious differences with the US," Zarif said. "We have built mutual distrust in the past. I hope that through courageous implementation of this some of that trust could be remedied."

US President Barack Obama welcomed a deal on Iran's nuclear program as "historic," but also warned Tehran that the world was watching to be sure it fulfilled its commitments.

"If Iran cheats, the world will know it," Obama said.

The agreement is not based on trust but on verification and if fully implemented will keep the world safer, he added.

UN Secretary General Ban Ki-moon welcomed the framework Iran nuclear deal, saying it will pave the way to bolstering peace and stability in the Middle East.

"A comprehensive, negotiated solution to the Iranian nuclear issue will contribute to peace and stability in the region and enable all countries to cooperate urgently to deal with the many serious security challenges they face," Ban said.

The Russian Foreign Ministry also said a deal in Lausanne would help the security situation in the Middle East as Tehran would now be able to take more active part in efforts to solve conflicts in the region.

German Chancellor Angela Merkel welcomed a framework deal agreed with Tehran, saying the international community had never "been so close to an agreement preventing Iran from having nuclear weapons".

France's foreign minister described the agreement with Iran as positive but underlined there was "work to do" before a final deal in June.

Furthermore, French President Francois Hollande warned that sanctions on Iran "can be re-imposed" if a deal over disputed nuclear program is not applied.

Israel said agreement between Iran and the world powers "must significantly roll back Tehran's nuclear capabilities."

World powers and Iran have released a joint statement at the talks in Lausanne, announcing a preliminary deal. It said enough progress had been reached to continue the negotiations until a final deadline on June 30. (02.04.2015)

As talks on Tehran's nuclear program go two days past their deadline, Iran's foreign minister says 'significant progress' has been made. But the devil is still in the details. (02.04.2015)

World leaders' talks with Iran seeking a nuclear deal continue to drag on a day after a self-imposed deadline. But French Foreign Minister Fabius has said that the negotiators are "a few meters from the finishing line." (02.04.2015)