The Organization of American States expressed "energetic condemnation" over the continued violence and urged for new elections in 2019. The Nicaraguan government called the resolution "illegal, illegitimate and unfair." 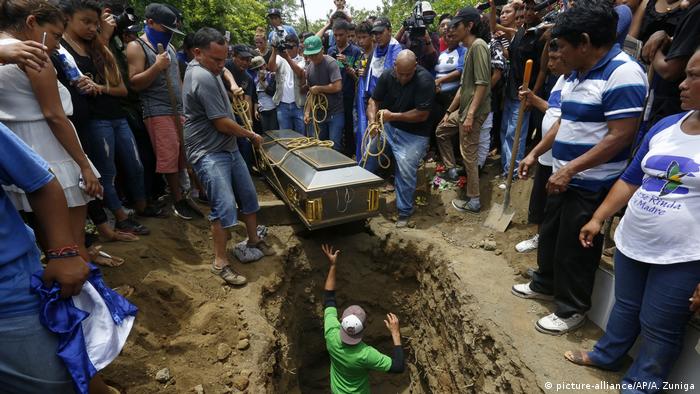 The Organization of American States (OAS) adopted a resolution on Wednesday calling for early elections in Nicaragua and urging for an end to the wave of political violence that has gripped the Central American nation for three months.

The regional bloc expressed its "energetic condemnation and serious concern over all the acts of violence, repression, human rights violations and abuse, including those committed by police, para-police groups."

Of the 34 members of the OAS Permanent Council, 21 voted in favor of the resolution, while three rejected it, seven countries abstained and three were absent from the meeting in Washington, DC. Nicaragua, Venezuela and the Caribbean nation of St Vincent and the Grenadines were the three countries who voted "no" on the resolution.

The OAS document urged the government of President Daniel Ortega to "support an electoral calendar" that had been proposed by the Nicaraguan opposition alliance in the most recent peace talks. The opposition has asked to have the 2021 elections moved forward to March 31, 2019, a request that the government has repeatedly rejected.

The Nicaraguan ambassador to the OAS, Denis Moncada, denounced the resolution as "illegal, illegitimate and unfair."

"We have working institutions, a rule of law, a Constitution," Moncada said shortly before the vote took place. "That's why it is not right that this permanent council becomes a sort of court that no one has authorized nor given power to pass judgment on Nicaragua," he added.

Moncada also reminded OAS members that his government is currently under attack "from terrorist groups" seeking to "overthrow a legitimate government."

US Vice President Mike Pence celebrated the vote on Twitter, hailing that the "hemisphere is watching and raising its voice in support of the Nicaraguan people."

AI director for the Americas, Erika Guevara-Rosas, said that police and pro-government armed groups were responsible for the vast majority of the deaths, which the NGO puts at nearly 300 people.

"President Ortega has shown time and again that he will stop at nothing to crush all those who dare to oppose his government and anyone unfortunate enough to get in the way," Guevara-Rosas said.

The government has aggressively targeted opposition strongholds in recent weeks. In particular, security forces have repeatedly attacked the city of Masaya and its Monimbo district.

On Tuesday, government forces appeared to have retaken control of Masaya after an hourslong siege, pushing hundreds of opposition protesters into hiding. Paramilitaries waving assault rifles drove through the center of the city and planted a flag of Ortega's ruling Sandinista National Liberation Front over a main square in the Monimbo district.

Masaya, Nicaragua's third-largest city, was once a bastion of opposition to the US-backed dynasty of Anastasio Somoza, who was toppled by Ortega's left-wing Sandinista guerrillas in 1979.

The government's attacks on Masaya were carried out in the midst of strong international condemnation from the US, the EU, human rights organizations and the UN Commission on Human Rights.

Canada said the crisis in Nicaragua poses "serious security risks" for the region. A human rights organization confirmed 212 deaths in an official report on the violence, which Nicaragua rejected as "notably biased." (23.06.2018)

Tensions escalated after the Netherlands informed Nicaragua that it would not be funding a hospital promised long ago.