Canada said the crisis in Nicaragua poses "serious security risks" for the region. A human rights organization confirmed 212 deaths in an official report on the violence, which Nicaragua rejected as "notably biased." 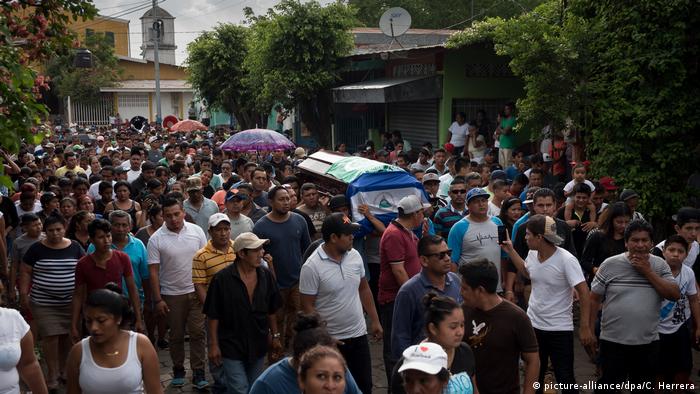 The Canadian government spoke out on Friday against Nicaragua's crackdown on protesters in the cities of Managua and Masaya, calling a lack of justice and accountability for the crimes that have been committed unacceptable.

"We condemn the killings of unarmed protesters by state security forces and paramilitary groups and the crackdowns in Managua and Masaya," Foreign Affairs Minister Chrystia Freeland said in a statement.

"The civilian population is being intimidated on a daily basis by these forces," Freeland said. "The clear absence of justice and accountability for their crimes is unacceptable. The perpetrators of these actions must be held accountable."

The Canadian government said the conflict in Nicaragua has also had a "devastating impact" on its citizens, but that it is also "posing serious risks to the security of the region."

The Inter-American Commission on Human Rights (IACHR) gathered on Friday at the Organization of American States (OAS) headquarters in Washington, DC, to release its report on the crisis.

The IACH confirmed what Nicaraguan human rights advocates said this week, that the death toll during two months of anti-government unrest has risen to 212 with more than 1,300 people wounded, and that President Daniel Ortega's government was responsible for the violence.

"Nicaragua has not fulfilled its international obligations to respect, protect and guarantee human rights in the context of the social protests that began on April 18," the regional human rights organization said in its report, which was based on a visit to the Central American country this week.

The 97-page document found that the state response to mass demonstrations has been characterized by repression and criminalization of protesters and the social movement they represent. This has resulted "in serious violations of human rights," the IACHR said.

"State violence has been aimed at discouraging participation in demonstrations and quelling this expression of political dissent," the IACHR concluded and called on Nicaragua's government to "reach a constitutional, democratic and peaceful solution to this human rights crisis."

The statement was rejected by Nicaraguan ambassador to the OAS, Denis Moncada, who said that the findings of the IACHR were "subjective, prejudiced and notably biased." Nicaragua was supported in the OAS meeting by the Venezuelan and Bolivian delegations.

"The same tactics that have been used to destabilize Venezuela are being used right now on Nicaragua," said Venezuelan Ambassador Carmen Velazquez.

Repression had ramped up this week after a dialogue between the opposition and the government broke down on Monday. Right away, clashes reignited between protesters and police in the city of Masaya, which declared itself in "rebellion" against the government.

On Thursday, the Nicaraguan clergy announced they were traveling to the city to "prevent a massacre" and provide support to its citizens. By Friday, the clergy, along with Nicaragua's main human rights organization, managed to reach an agreement with police forces in Masaya to cease violence.

Police commissioner Ramon Avellan is set to have pledged to "suspend all harassment," Cardinal Leopoldo Brenes confirmed. "Let's see if it's really true," he added.

The Nicaraguan Association of Human Rights says that 21 people have died in Masaya's standoff against police and pro-government mobs.

Citizens rushed to supermarkets to stock up on basics ahead of a day-long economic shutdown. Nicaragua's Catholic Church supported the strike and announced its new effort to mediate between the government and opposition. (14.06.2018)