Two years after the devastating fire at Notre Dame Cathedral in Paris, reconstruction plans are causing a stir, as centuries-old oak trees are being felled.

Despite protests sparked by the restoration plans for Notre Dame de Paris, a recent ceremony to fell trees for the reconstruction of the cathedral was remarkably solemn.

For the event in early March, both Agriculture Minister Julien Denormandie and Culture Minister Roselyne Bachelot had traveled to the forest of Berce, 200 kilometers (125 miles) southwest of Paris. Accompanied by several crews of TV reporters, they hammered tags onto the oak trees that were to be chopped down.

Some 2,000 such trees will be used to reconstruct the cathedral's roof framework and spire.

"I think that Notre Dame, as a symbol of our past, shows to what extent our forests are regularly writing history," Denormandie declared.

Minister Bachelot said: "We need this wood, as we have decided to reconstruct the cathedral the same way it had been just before the fire" — that is, as conceived by the architect Eugene Viollet-Le Duc from 1843 on.

Yet the promise to fully reconstruct the monument within five years seems increasingly unrealistic. 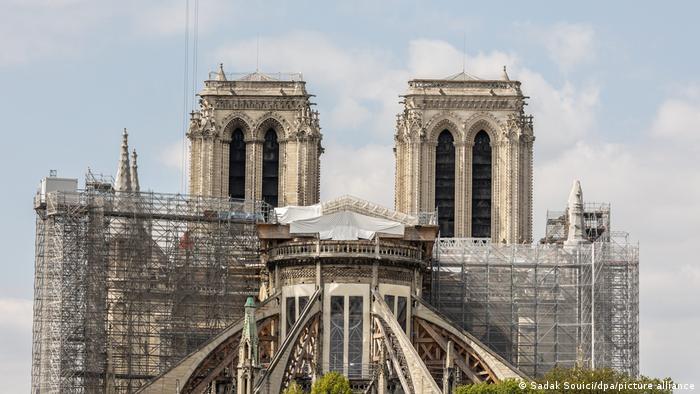 According to plans, restoration work is to be completed in three years

Fire caused shock around the world

Two years ago, the blaze that caused Notre Dame's spire to collapse and destroyed the cathedral's roof shocked France and the world. For days on end, TV teams from around the world broadcast live from the UNESCO World Heritage monument.

President Emmanuel Macron had then promptly promised to have Notre Dame rebuilt within five years. He first considered having the spire redesigned in a contemporary way — but finally gave in to experts asking to reconstruct it according to Viollet-le-Duc's original plans.

Shortly after the fire, donors from around the world pledged almost €1 billion to finance the reconstruction. So far, €833 million ($991 million) coming from 340,000 contributors in 150 countries has been collected, according to Notre Dame's administrative body.

Half of the oaks needed for the building's reconstruction will come from public forests, the other half from private ones, all located in France. The wood will be stored for 12 to 18 months to reduce its moisture level.

The centuries-old trees were going to be chopped down in any case, according to Guillaume Larriere, a spokesman at ONF, the public agency that manages France's forests. "We regularly fell huge, old trees — to provide the market with timber but also to make space for younger trees, which need a lot of light," he told DW.

He said France had some of the strictest forest regulations in the world.

"It was the right decision to gather all that wood in French forests — that way, we have full transparency as to how it's being felled," he said. 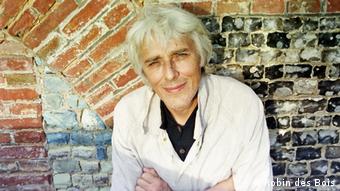 "We are amputating the forests and wresting oaks from them which are crucial for our woods' regeneration, as they are a habitat for many insects and birds," he told DW.

"I'd never have thought they'd again opt for the infernal duo of wood and lead, which made the fire possible and caused considerable lead pollution," he added.

France's public institute for industrial environment and pollution, Ineris, indeed found the area of Notre Dame and some of its surroundings to be highly lead-polluted after the fire.

In 2019, Robin des Bois had sued authorities for endangering human life by failing to take immediate measures to limit the population's exposure to the toxic lead released in Notre Dame Cathedral's fire. The case was however dismissed a few months ago.

Bonnemains said other building materials would have been more contemporary and secure: "Saint-Pierre-et-Saint-Paul Cathedral in Nantes for example has a roof framework made of concrete — a fire there last year only caused very limited damage."

Concrete is not an option for Notre Dame de Paris, a spokesman for the cathedral told DW.

"The monument's roof structure needs a very specific weight for the building to be stable: A combination of wood and lead is the ideal mix," he said, adding that the authorities were taking possible health considerations very seriously.

"And the wood and lead structure wasn't the problem — the fire took hold due to human error. We simply need more security personnel at certain key locations. And the future design will include fire protection doors," he said.

According to the spokesperson, the wood — and its storage delays — was also perfectly adapted to the reconstruction schedule. Works to secure the building will go on until July, with public tenders to be launched in the summer. The actual reconstruction works should start by the end of this or early next year.

"That's how Notre Dame will indeed, according to the president's wishes, reopen for mass in 2024," he claimed. 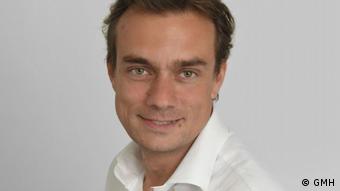 But other insiders doubt that the monument's reconstruction will be completed by then.

"Securing the monument has taken a lot of time, and we'll probably have to continue certain restoration works, for example at the arch buttresses outside, after 2024," Yann de Carne told DW. He's the head of industry association GMH, which represents 80% of the companies that carry out restoration works at national monuments in France.

"However, opening the building for church services or parts of it for visitors should be possible in three year's time," he added.

Judicial procedure to be relaunched

"The reconstruction of Notre-Dame will take many more years — that'll give us the time to challenge the way they want to go about it," he stated.

The group is now relaunching its lead pollution lawsuit, as arguments which have emerged following their 2019 case show that the health issues remain relevant.

Officials had closed the site after finding high levels of lead in the church. Environmental, health and labor groups have accused the government of downplaying the risk of lead contamination for locals and tourists.