The suspect in the shooting at a mosque outside Oslo held far-right, anti-immigrant, views, authorities have said. The young white male is also suspected in the murder of his stepsister. 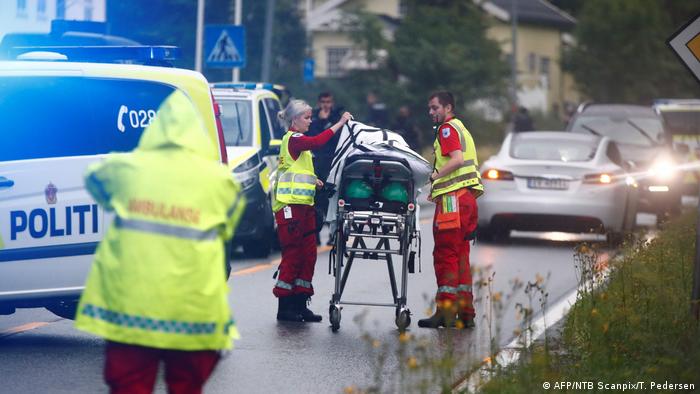 Norwegian police are treating the shooting at the Al-Noor Islamic Center in Baerum, a suburb of Oslo, as an "attempted act of terrorism," authorities said Sunday.

The suspected shooter, a white male in his 20s, had expressed far-right, anti-immigrant views online, assistant chief of police Rune Skjold said in a news conference.

In particular, the suspect had expressed support for Vidkun Quisling, a Norwegian politician who collaborated with Nazi forces when Germany occupied Norway during World War II.

Norwegian media reported on Saturday that the suspect was believed to have praised the Christchurch, New Zealand, shooter in an online forum hours before the attack.

But the authenticity of the post or the exact identity of its author has not yet been established.

He also allegedly supported the man suspected of a shooting in a southern California synagogue in April, and the man accused of fatally shooting 22 people at a Walmart in El Paso, Texas, earlier this month.

Armed with multiple weapons, the suspect entered the mosque, where he is said to have opened fire on Saturday. Only three people were in the house of worship at the time.

The suspect did not kill anyone in the mosque and was ultimately overpowered by the congregants until police arrived and arrested him.

But he is suspected of one murder that he presumably committed before he went to the mosque.

"Police are confirming that it is the suspect's 17-year-old stepsister that was found murdered yesterday," police said in a statement

Norway's Prime Minister Erna Solberg called the shooting a "direct attack on Norwegian Muslims," as well as an "attack on freedom of religion."

"Today we stand shoulder to shoulder with Norwegian Muslims in condemning the attack," Solberg said in a Facebook post.

Read more: The rise of the far-right in the East

The attack has raised fear among many Muslims in the country.

"The terror attack in Baerum is the result of a long-lasting hate of Muslims that has been allowed to spread in Norway, without Norwegian authorities having taken this development seriously," the Muslim organization Islamic Council Norway said in a statement.

As a result, Oslo police have increased security for Sunday's Eid celebrations. This included ordering police patrols to be armed, which is not common.

According to official estimates from 2016, some 200,000 Muslims live in Norway, making up nearly 4% of the country's population.

In July 2011, Norway was the scene of one of the worst-ever attacks by a right-wing extremist, when 77 people were killed by Anders Behring Breivik on the island of Utoya.

Perpetrators of mass shootings in the US have used the website to disseminate white nationalist propaganda. A cybersecurity firm has withdrawn its services to 8chan, saying: "They have proven themselves to be lawless." (05.08.2019)

After the El Paso massacre, US President Donald Trump condemned racism and intolerance. But the message that hate has no place in the United States is one he still needs to get, writes Anabel Hernandez. (11.08.2019)