Norway battles to contain oil slick after tanker is grounded | Europe| News and current affairs from around the continent | DW | 18.02.2011

Norway battles to contain oil slick after tanker is grounded

Norwegian experts are battling to minimize the threat posed to valuable marine habitats after an oil tanker ran into a rock between Norway and Sweden. Floating barriers were put in place as oil reached the shoreline. 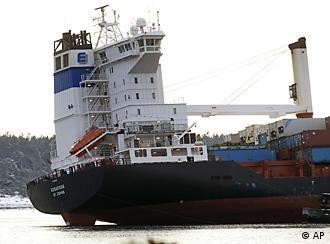 Norwegian authorities are struggling to contain the threat posed to a protected marine habitat after an oil tanker ran into a rock while at sea late on Thursday.

Oil from the Icelandic vessel Godafoss, believed to contain some 800 metric tons of fuel, had reached a stretch of shoreline on Friday morning, the Norwegian Coastal Association (NCA) said in a statement.

The incident happened on the Skagerrak channel of water, between Norway and Sweden. Experts fear that the leaking oil poses a risk to the Ytre Hvaler park - Norway's only national marine nature reserve - as well as Sweden's Kosterhavet protected marine area.

Environmental protection teams and NCA tugboats were called in to assess the threat, with floating barriers set up to limit the spread of the oil. Calm sea and moderate winds on Friday meant that weather conditions were considered favorable to a clean-up.

The ship had been heading from the southeastern Norwegian town of Fredrikstad to the southern Swedish town of Helsingborg.

The results of the first ever global marine life census have been published in London after a decade of research conducted by 2700 scientists. (05.10.2010)

Thirteen weeks after the oil catastrophe in the Gulf of Mexico, BP says it has successfully installed a cap to stop of the flow of oil into the sea. Tests on Tuesday will determine if the oil spill has been stopped. (13.07.2010)