Pyongyang's ICMB technology has advanced at unprecedented speeds due to the acquisition of Soviet missile systems built in Ukraine, said experts. They warned the "window of opportunity will soon close" without action. 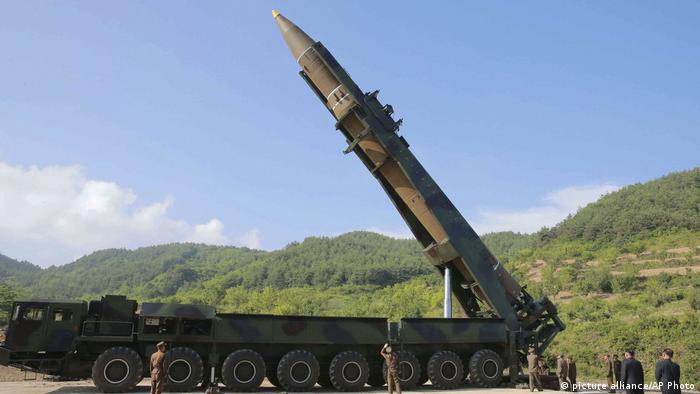 Defense researchers linked the momentous advances in North Korea's missile system to technology found in the Soviet RD-250 family of rocket engines, according to a report published by the London-based International Institute for Security Studies (IISS) on Monday.

"Available evidence clearly indicates that the LPE is based on the Soviet RD-250 family of engines, and has been modified to operate as the boosting force for the Hwasong-12 and Hwasong-14."

But Oleksandr Turchynov, who serves as the secretary of Ukraine's Security and Defense Council, denied that Ukrainian authorities played any part in the alleged acquisition of Soviet missile technology.

"This information is not based on any grounds, provocative by its content, and most likely provoked by Russian secret services to cover their own crimes," said Turchynov. "Ukraine has never supplied rocket engines or any kind of missile technology to North Korea."

Pyongyang's missile defense system has made leaps since its launch failures in 2016. In July, North Korea tested its first intercontinental ballistic missile (ICBM), prompting tougher sanctions from the international community.

The Soviet RD-250 family of rocket engines was originally developed in the Soviet Union in the 1960s at a factory based in present-day Ukraine.

Elleman said that "this is not to suggest that the Ukrainian government was involved." However, he noted that workers at the facilities who suffered from the country's economic misfortunes were likely "susceptible to exploitation by unscrupulous traders, arms dealers and transnational criminals operating in Russia, Ukraine and elsewhere."

'Perfecting its capacity to terrorize'

In order to prevent North Korea from "perfecting its capacity to terrorize America with nuclear weapons," the US and allies, alongside China and Russia must agree on a ban on future missile testing.

"But the window of opportunity will soon close, so diplomatic action must be taken immediately," said Elleman.

Following the enactment of increased sanctions by the UN Security Council last week, China stopped imports of commodities like iron, lead and seafood from entering the country. Tensions between North Korea and the US have reached a fever pitch following a war of words involving the countries' leaders.