Japanese police are investigating eight men who have turned up on Japan's northern coast. The men are said to be from North Korea and appear to be fishermen whose vessel ran into trouble, rather than defectors. 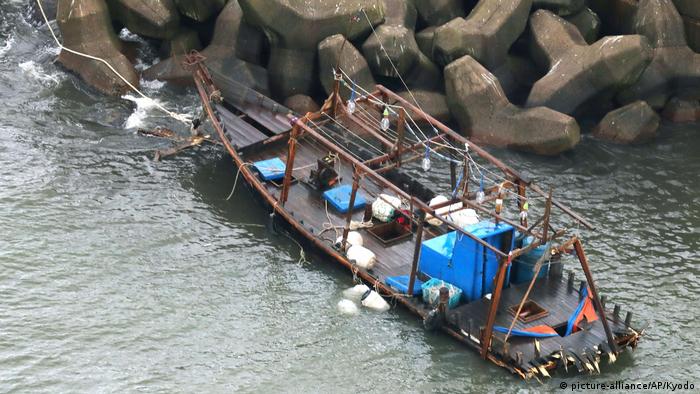 Police in the Akita region found the men late on Thursday after a call from a local resident that "suspicious men" were standing at the seafront in the town of Yurihonjo. The men were taken into custody, walking unaided, according to Japanese national broadcaster NHK.

"We understand that the eight individuals are reporting that they came from North Korea for fishing, but drifted there after their ship experienced (mechanical) troubles," said Hachiro Okonogi, chairman of the National Public Safety Commission. 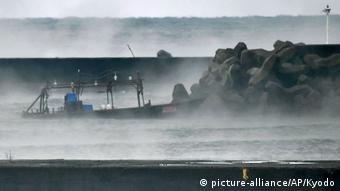 A wooden boat is moored at a nearby marina, in Yurihonjo, Akita prefecture, northern Japan, on November 24

Police said the men were in good health and spoke Korean. Investigators found a wooden boat at a nearby marina, with television footage of a pier in Yurihonjo showing a wooden boat rigged with bare light bulbs, used to attract fish and squid.

Japan and North Korea have no diplomatic ties and historical tensions have been compounded by Pyongyang's recent missile and nuclear threats.

Japan is reported to be working on how it would cope with an influx of tens of thousands of North Koreans if a crisis were to break out on the Korean Peninsula as tensions in the region continue to be high.

The investigation will look into the possibility the men were fishing illegally, Chief Cabinet Secretary Yoshihide Suga told reporters.

The waters between Japan and the Korean Peninsula are known as a rich fishing ground and North Korean fishermen often take risks to travel far out into the Sea of Japan to meet government quotas for bigger catches.

Wreckage from North Korean boats sometimes washes ashore in northern Japan during winter due to seasonal winds. More than a dozen cases of wreckages have been reported in the three northern prefectures facing the Sea of Japan this year, the Coast Guard said.

The Japanese Coast Guard last week saved three out of 12 North Korean fishermen after their boat capsized in high seas. The survivors were returned home.

A North Korean soldier recently defected to the South after being shot and wounded by his country's military as he made his getaway across the border in the heavily guarded Demilitarized Zone between the two countries.

North Korea's "new vessels" may be relatively advanced, but they pale in comparison with the US naval assets that they face. So why is Pyongyang lavishing millions on these submarines? Julian Ryall reports. (20.11.2017)

South Korean media reports a surge in North Korea defections across the heavily fortified border. Desperation with the Kim regime and Trump's pressure over ballistic missiles could be the reasons. Julian Ryall reports. (12.07.2017)