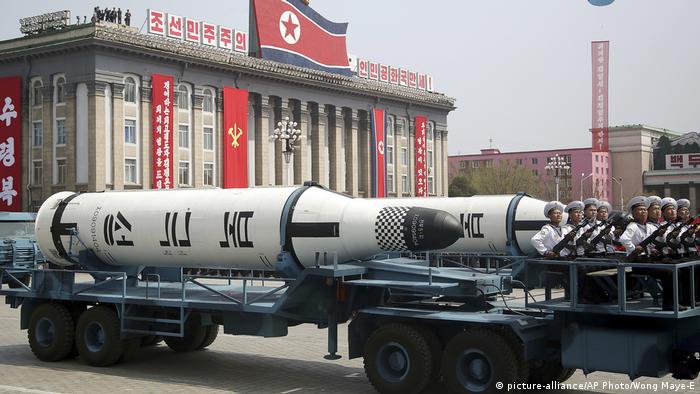 Kim said Pyongyang would continue to develop its nuclear and ballistic weapons unless the US changed its policy towards North Korea.

"There is no ground for us to get unilaterally bound to the commitment any longer," North Korea's official KCNA news agency cited Kim telling top party officials. "The world will witness a new strategic weapon to be possessed by the DPRK in the near future," he added, referring to the country by its official name.

The North Korean leader made the comments during a four-day ruling party conference that began Tuesday in the capital.

Kim had vowed North Korea would never give up its national security for economic benefits. The leader described the US as increasingly becoming more hostile and accused Trump's administration of delaying nuclear negotiations. However, the North Korean leader showed no clear indication of completely abandoning negotiations with Washington or resuming suspended tests.

North Korea's self-imposed moratorium in 2018 has been at the center of nuclear diplomacy between Washington and Pyongyang. In the last two years, Kim and US President Donald Trump had met up a total of three times to discuss North Korea's steps towards disarmament and removal of US sanctions imposed on the country, but their negotiations yielded few tangible results.

Kim said that "if the US persists in its hostile policy toward the DPRK [Democratic People's Republic of Korea], there will never be the denuclearization on the Korean Peninsula and the DPRK will steadily develop necessary and prerequisite strategic weapons for the security of the state until the US rolls back its hostile policy,'' the local Central News Agency quoted Kim as saying.

"He said that we will never allow the impudent US to abuse the DPRK-US dialogue for meeting its sordid aim but will shift to a shocking actual action to make it pay for the pains sustained by our people … '' the agency reported.

Trump repeated an earlier comment that he hoped Pyongyang's "Christmas gift" would be a "beautiful vase."

"So, seeing that reporting publicly, it remains the case that we hope that Chairman Kim will take a different course," Pompeo said in the interview. "We're hopeful that ...Chairman Kim will make the right decision - he'll choose peace and prosperity over conflict and war."

In a separate interview, CBS News asked Pompeo whether he was distressed about Kim's message.

"If Chairman Kim has reneged on the commitments he made to President Trump, that is deeply disappointing," Pompeo said.

"He made those commitments to President Trump in exchange for President Trump agreeing not to conduct large-scale military exercises. We've lived up to our commitments. We continue to hold out hope that he will live up to his as well."

UN Secretary-General Antonio Guterres said on Wednesday that he was "deeply concerned" that North Korea could resume nuclear and missile tests.

"The Secretary-General very much hopes that the tests will not resume, in line with relevant Security Council resolutions," UN spokesman Stephane Dujarric said. "Non-proliferation remains a fundamental pillar of global nuclear security and must be preserved."

North Korea has carried out six nuclear tests to date and has previously fired missiles capable of reaching the US mainland.