Nigerian students experience a nightmare in Croatia | Europe | News and current affairs from around the continent | DW | 07.12.2019 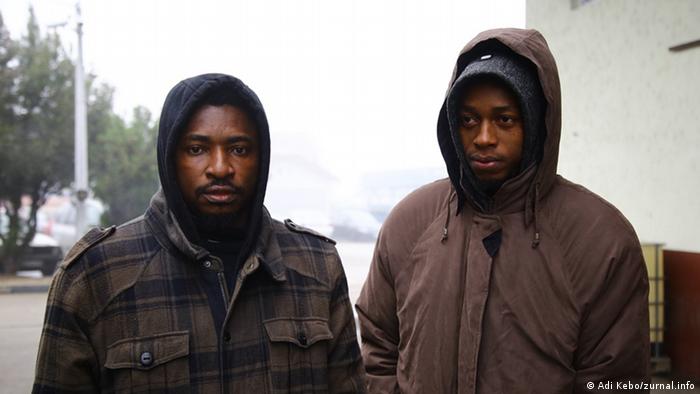 Shortly before Nigerian students Eboh Kenneth Chinedu and Abia Uchenna Alexandro were deported from Croatia and forced to enter Bosnia and Herzegovina, they were told to sign documents written in Croatian. "The van stopped. They had us get out, and then a Croatian officer said, 'Sign!' I said that I wouldn't sign something I couldn't read. Then the policeman pulled out a gun and told me he'd shoot me if I didn't. I was scared, so I signed it."

That is what Eboh Kenneth told a journalist from the Bosnian website Zurnal had happened when he and his classmate were deported to Bosnia under threat of deadly bodily harm. He says after they signed the documents, Bosnian police took their money and forced them to cross the border through a path in the woods. Eboh Kenneth says there were also a number of migrants in the group. Eventually, they ended up in the Miral refugee camp in Velika Kladusa. 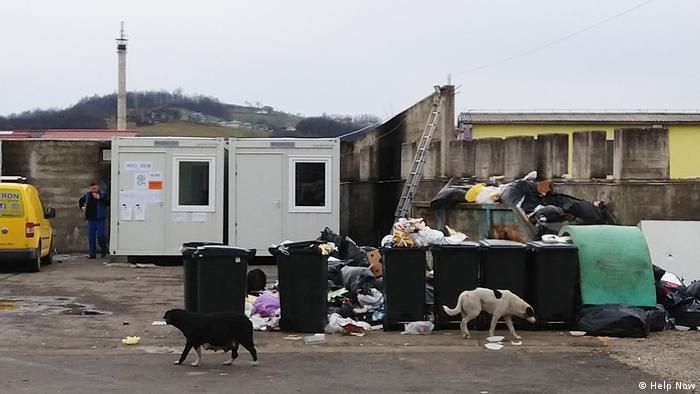 Living conditions in the camp in Velika Kladusa are substandard

Their vacation plans were originally quite different. The two men, along with two other students and a professor from the Federal University of Technology Owerri, embarked on their journey as part of the Nigerian table tennis team at the 5th World InterUniversities Championships (WIUSC) — a kind of college Olympics — in the coastal city of Pula, from November 13-17. Their plan was to visit the Croatian capital, Zagreb, after the tournament and then fly back home to Nigeria, via Istanbul.

For Eboh Kenneth and Abia Uchenna, however, things took a very different turn. They say that after they arrived in their hostel in the capital, they dropped off their belongings and went out to see the city. They also left their passports in the hostel. In the city, they were approached by police at a streetcar stop and then taken to the police station. They say none of their explanations of who they were and why they were in Croatia helped. They were then thrown in a van with several migrants and driven to the Croatian-Bosnian border. That is where they were threatened and told to leave the country.

As has so often been the case in the past, Croatian police have denied the story. "There was no police intervention involving these people," read a statement from the Croatian Interior Ministry. "Accusations that Croatian police target and convict individuals for their skin color are entirely untrue and we wholeheartedly reject them."

The statement did not, however, explain how the students ended up at a Bosnian refugee camp 100 kilometers (62 miles) from Zagreb, despite having no papers, no cash and no intention of even going to Bosnia and Herzegovina. "We have no documentation showing that either person left Croatia in a legal manner," was the only further comment on the matter.

For Tajana Tadic of Are You Syrious, a Croatian human rights group that helps refugees, neither the students' story nor the police explanation comes as a surprise. "Since the men are not refugees, we haven't had any direct contact with them. But their description of Croatian 'pushback' (forced deportation from Croatia to Bosnia and Herzegovina) is consistent with hundreds of other cases, many of which are publicly known. This is not a unique case, but another bizarre example of a common, systemic practice."

Although the details cannot be confirmed, "it seems more plausible to us that there was simply a 'mistake' made during a routine instance of racial profiling than the story that the students, who entered Croatia legally, somehow ended up in Bosnia on their own for some unexplained reason," says Tadic. 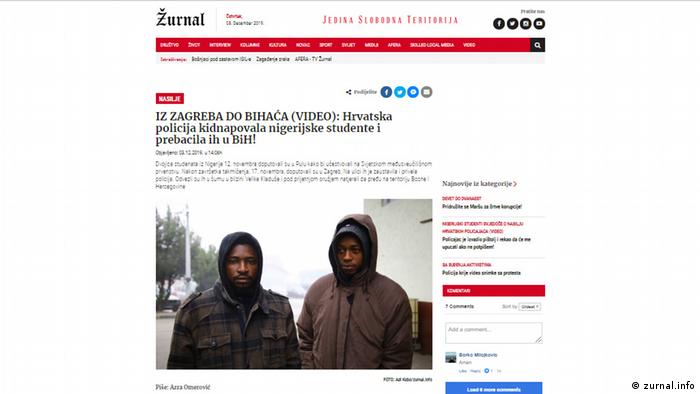 The story was presented by the Bosnian media outlet Zurnal

There have been a number of well-documented instances in the past of migrants being illegally deported to Bosnia and Herzegovina from Croatia. Various human rights organizations have compiled numerous witness statements attesting that police violence, robbery and abuse of victims is common. Doctors, too, have reported similar crimes — even against small children. Tadic says, "Croatian officials justify the practice by saying they plan to be admitted into the Schengen Area," noting that it is important for them to seem to be model border guards at the edge of the EU.

In the case of the Nigerian students, the Croatian Interior Ministry is offering a different interpretation of events. It says there was a prior case in which a sporting event was used as a way to apply for asylum in Croatia — that is, in the EU. The Interior Ministry says it is looking into whether that is also the case in this instance, adding that neither of the students had table-tennis paddles with them and that they played miserably in the Pula tournament. The ministry says the students' timeline doesn't add up, either: The men said they were picked up by police on November 17, but authorities say their passports were not picked up at the hostel until the next day.

Who can you believe?

According to the story being put forth by Croatian authorities, the men in question are not students who came to the country to participate in a sports tournament, but rather people who intended to remain in Croatia from the very start. The Nigerians claim the opposite.

The Croatians are using the example of a third Nigerian student to back up their claim. They say that after the tournament wrapped up, he left the group and attempted to enter Slovenia on two different occasions. He was denied entry, however, because he did not possess a visa for the Schengen Area. Upon being denied entry, he applied for asylum in Croatia. He is currently awaiting his hearing at an asylum center in Zagreb.

Meanwhile, Eboh Kenneth Chinedu and Abia Uchenna Alexandro are stuck at the Miral refugee camp. They did, however, manage to get their passports thanks to a friend who sent them from Zagreb per post. Bosnian authorities have criticized their Croatian colleagues: "These people are the victims of illegal actions from the Croatian side," says Dragan Mektic, Bosnia and Herzegovina's minister of security, adding, "They must be returned to Croatia as soon as possible."