Fire breaks out in migrant center in Bosnia, several injured

There were 32 reported injuries after flames and smoke forced migrants to jump out of the windows of their shelter. It is the second fire in recent weeks to occur in the region, just on the border with Croatia. 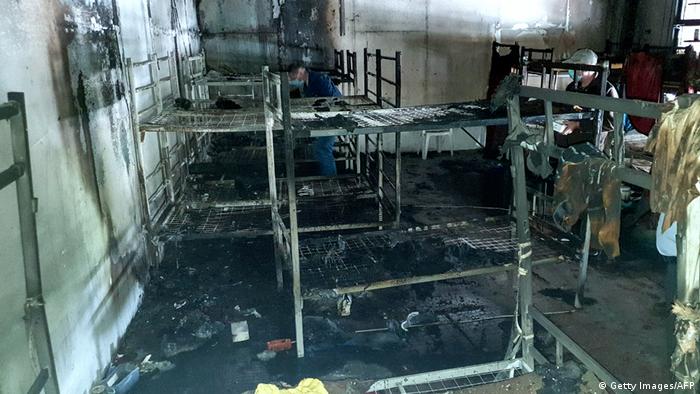 A fire broke out engulfing a migrant center in Bosnia on Saturday, with at least 32 people injured. Up to 500 people are hosted there at any one time.

The fire began early in the morning in the northwestern town of Velika Kladusa, just a few kilometers from the border with Croatia to the west.

Police spokesman Ale Siljdedic said fire brigades were at the site and would begin an investigation. "The fire has been put out, 32 migrants have been injured," he said. "But we don't know the extent of the injuries." The wounded were taken to nearby hospitals.

Police were unable to give a full explanation as to how the fire began but Siljdedic said it was "doubtless" that an electrical fault was responsible.

Videos on social media showed people jumping out of the windows to escape the burning building.

It was the second incident of its kind in recent weeks. Three migrants died when a candle ignited an abandoned building in which they were sheltering, according to the local branch of the Red Cross. Another migrant fell from the top floor of a building and a man set himself on fire and died.

"People are sleeping in parks, in car parks, on the footpaths, and in dangerous buildings," said Indira Kulenovic, operations manager for the International Federation of the Red Cross and Red Crescent Societies (IFRC). "The situation is dire," she added.

About 25,000 people from Asia and North Africa entered Bosnia from Serbia and Montenegro in 2018, according to Bosnia's security forces. About 6,000 have arrived this year, with many heading for the northwest due to its proximity to Croatia, an EU member state since 2013. Bosnia formally applied for EU membership in February 2016 but is still waiting for an official response.

Croatian authorities have denied a report that police are illegally pushing migrants back into neighboring Bosnia. Migrants are struggling to survive in makeshift camps as winter sets in and temperatures plunge. (17.12.2018)

Coronavirus: Germany should not ease lockdown over Christmas, says top doctor 2h ago