Bosnia′s Vucjak camp: Migrants, a garbage dump — and a road to nowhere | Europe | News and current affairs from around the continent | DW | 16.11.2019

Bosnia's Vucjak camp: Migrants, a garbage dump — and a road to nowhere

After being overwhelmed with migrants, authorities in the Bosnian city of Bihac moved hundreds of them to an old garbage dump. DW looks into key elements of what has become an escalating crisis. 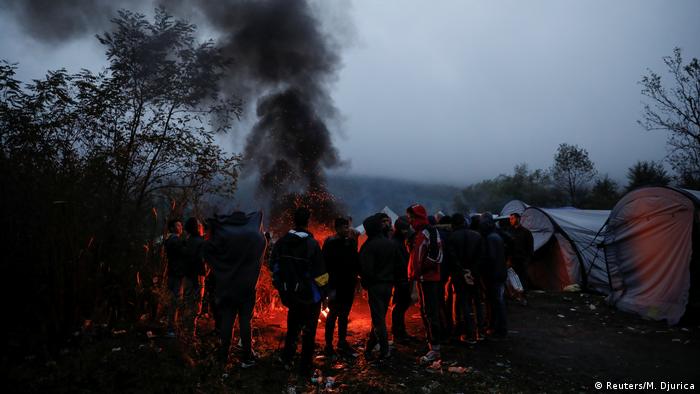 Winter is coming to Bihac in the northwest of Bosnia & Herzegovina, and hundreds of migrants are still living in unheated tents atop the nearby defunct Vucjak landfill. Many of them have scabies or body lice, or are suffering from hepatitis due to the lack of clean water and adequate medical care.

The situation at the camp is fast taking on crisis proportions: The EU is demanding that the makeshift camp's residents be relocated, locals are protesting against the migrants, doctors are warning that winter might soon claim lives and local officials are struggling to find an alternative site, as tensions between Bosniaks and Serbs also come into play.

So what are the elements behind this dire state of affairs?

It takes less than half an hour by car to get from Bihac, a mostly Muslim city of some 45,000 people, to the Croatian border. Thousands of illegal migrants arrived in the city in recent years in a bid to sneak into the EU and continue their journey westward. Local authorities were overwhelmed. Bihac residents reported that migrants were breaking into their houses, harassing people on the street and fighting among themselves.

Bihac's two main refugee accommodation centers, Bira and Miral, were already bursting at the seams. In June this year, officials imposed a curfew to limit migrants' movements between 10 p.m. and 6 a.m. The local police also started rounding up migrants from the streets and parks and taking them to a new location — Vucjak.

Authorities placed around 700 migrants, all of them male, in the improvised camp of Vucjak. The camp is raised on top of old landfill located some 10 kilometers (6 miles) away from Bihac.

City officials poured a layer of dirt and gravel over the site before transporting migrants to Vucjak. However, the camp had no solid buildings or pre-existing infrastructure to provide electricity, heating, clean water or sanitation. Activists warned that trash bellow the camp could still emit harmful gases.

Reporter Semir Mustafic from the regional N1 television has shared a video taken on the site.

Local doctors inspected the site soon after the camp was opened and slammed it as unacceptable. Speaking to DW's Bosnian department, provisional director of the local state clinic Jasminka Ljubijakic called the situation a "humanitarian disaster."

"Living conditions in Vucjak are inadequate and we cannot take responsibility for the health of people accommodated there," she said in June. "We cannot work in such conditions." 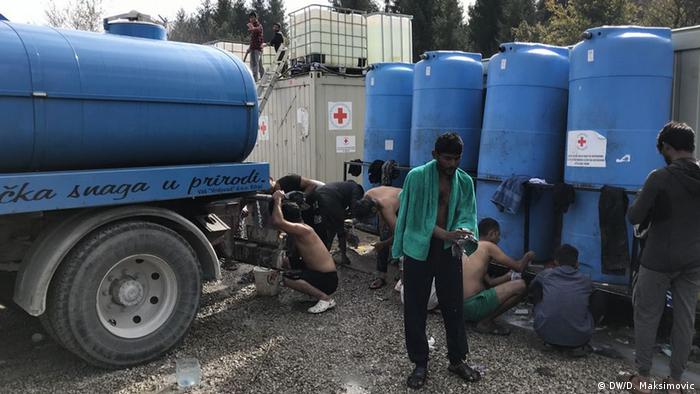 Migrants living in Vucjak also have to contend with unexploded mines near the site that were buried there during the 1990s Bosnian war. There are also vast minefields in the nearby mountains that separate Bosnia & Herzegovina from Croatia. People who attempt to sneak across the border are risking their lives.

Some camp residents pay thousands of euros for safe passage into Croatia; other look for guides and maps. But crossing the border is only one part of "the game," as the migrants have dubbed their attempts to continue their journey.

Under EU law, migrants are allowed to ask for asylum once they reach EU soil. However, migrants at Vucjak say that Croatian police are simply refusing to accept their asylum requests. According to the asylum-seekers, the police officers regularly beat and rob the migrants and then send them back into Bosnia. International activists, including Amnesty International and the Border Violence Monitoring Network, corroborate these accounts. Many Vucjak residents have reported crossing the border several times only to be caught, beaten and pushed back.

Croatian officials have repeatedly denied mistreating refugees. In an interview with Swiss television SRF in June, however, Croatian President Kolinda Grabar-Kitarovic said that "when you are pushing people back, there is a little bit of force."

The EU is refusing to fund the Vucjak camp and demanding its immediate closure. The bloc has already provided around €10 million ($11,1 million) for new, more appropriate accommodation. However, local communities are resisting efforts to build a migrant camp on their territory.

Authorities in Bosnia's Una-Sana Canton, where Bihac is located, recently suggested a site near the small village of Lipa, some 20 kilometers from the city. The village is populated mostly by Serbs, who, with Croats and Bosniaks, make one out of three constitutional nations in Bosnia & Herzegovina. The suggestion triggered protest among Serb politicians. Serb representatives filed a lawsuit against the Bihac mayor, claiming that the officials were trying house migrants at Lipa in order to prevent Serb refugees from returning to homes they had abanodoned during the 1990s war.

Meanwhile, leases for the other two migrant centers in Bihac, Bira and Miral expired on November 15. Authorities have not yet began to move over 2,300 migrants living at those locations and it was not immediately clear what will happen to them.

This week, the federal goverment of Bosnia decided to use two old military garrisons, one near the capital, Sarajevo, and the other near the eastern city of Tuzla, as accommodation for the migrants currently located in the country's northwest. The buildings have yet to be prepared for housing migrants.

The Vucjak migrant camp is set to remain open until alternative arrangements can be made. An EU delegation is expected on the site on Monday.

Doctors Without Borders (MSF) warned that residents of Vucjak camp were still walking around in "flip-flops, without socks or jackets, a lot of them suffering from respiratory infections and from skin diseases caused by the horrific living conditions."

"Unless the authorities provide safe, appropriate, winterized accommodation and adequate services to these people, we fear that it's only a matter of time before we see people dying" said MSF representative Nihal Osman.