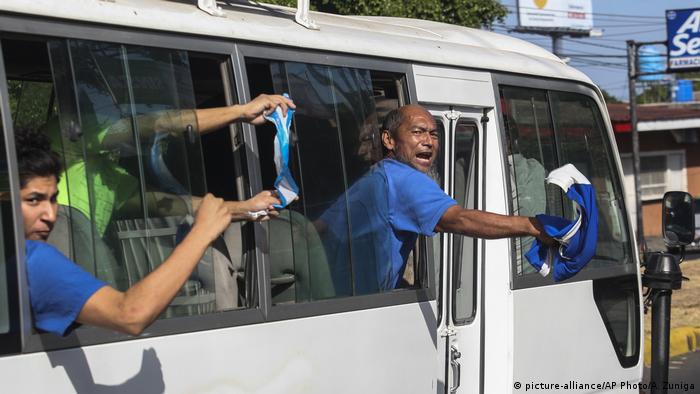 Representatives of President Daniel Ortega's leftist government and the opposition have begun talks aimed at ending a political crisis that has plunged the Central American country into a deep recession.

Ortega did not participate in the talks outside the capital, Managua, where government members, business representatives, students and opposition politicians met under the mediation of Catholic Cardinal Leopoldo Brenes.

Ahead of the latest dialogue, dozens of prisoners were released from La Modelo prison outside Managua.

One of the opposition's primary demands has been for the government to release more than 700 people jailed during the demonstrations triggered last April over pension reform, but that turned into calls for Ortega to resign.

The government did not say how many were let go on Wednesday, but the Permanent Commission on Human Rights said around 100 prisoners were released. It was unclear how many of them would remain under house arrest.

Ortega, a former guerilla fighter who was elected in 2006, implemented a deadly crackdown last year in response to mass protests. At least 325 people were killed, around 2,000 wounded, hundreds imprisoned and thousands forced to flee the country by the time the protests ended in October.

Critics have accused Ortega of forming a corrupt dictatorship and eroding human rights.

The political crisis led to Nicaragua's economy shrinking 4 percent last year. The economy could contract as much as 11 percent in 2019, according to some economists.

In response to the crackdown, the United States imposed sanctions on Ortega and his wife, Vice President Rosario Murillo, who the opposition claims is being groomed to lead the country. Ortega is 73 years old.

Luis Carrion, a former Sandinista guerrilla commander who is now in the opposition camp, said Ortega "is not seeking in good faith a real solution to the crisis."

"His goal is to break his isolation and avoid international sanctions, to preserve his power and to remain in the presidency until 2021," he said.

The crisis in Nicaragua is coming to a head. The Organization of American States and the European Union are increasing the pressure on Daniel Ortega's government. Will it work, or fizzle out, as it did in Venezuela? (19.07.2018)

Authorities in Nicaragua have raided a major, independent TV station and stopped it broadcasting. '100 percent Noticias' reported protests and a deadly government crackdown. (22.12.2018)

Nicaragua's decision came amid international condemnation of President Daniel Ortega's reelection, with the US and the European Union pressing him to hold fresh elections.