Carrie Lam received her official certificate from Chinese Premier Li Keqiang in Beijing. Lam will become the first female leader of the semi-autonomous city in its 20 years under Chinese rule. 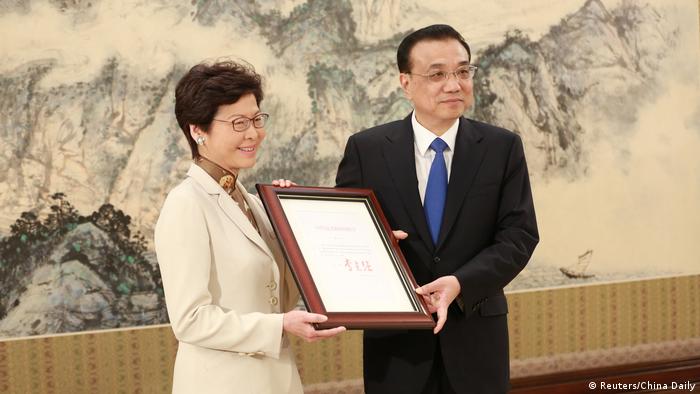 Carrie Lam has formally accepted her appointment as Hong Kong chief executive following her victory in the city's election in March.

On a four-day visit to Beijing, Lam met with Chinese Premier Li Keqiang in Beijing to receive her official certificate of appointment, followed by a meeting with Chinese President Xi Jinping.

Leaders of the 2014 Umbrella protest movement have received phone calls informing them of arrest and impending prosecution. The move comes one day after Carrie Lam was elected as Hong Kong's next leader. (27.03.2017)

Observers say that the Hong Kong Legislative Council election will be a lot different this time from the previous one held in 2012. DW spoke to analyst Victoria Hui about what is at stake in the vote for HK and China. (02.09.2016)

The assult of Ken Tsang by seven police officers in 2014 was caught on tape, sparking outrage in Hong Kong. Now he has been given a jail term for resisting arrest. (30.05.2016)

Considered Beijing's pick to lead Hong Kong, Xi said Lam has demonstrated "a firm stance in loving the country and Hong Kong, a diligent, pragmatic and responsible work style, as well as rich administrative experience and ability to handle complicated situations," according to Xinhua news agency.

Lam received 777 votes from the nearly 1,200–member election committee on March 26 to become Hong Kong's first female leader and the fourth leader since the end of British colonial rule in 1997. Lam will formally take office on July 1. Xi is expected to visit to celebrate the 20th anniversary of the handover from British to Chinese rule. Protests are expected for Xi's visit.

Lam has said she will unify the people of Hong Kong and make housing more affordable in one of the world's most expensive property markets.

Lam is expected to continue the "one country, two systems" formula once she takes office. Hong Kong is a semi-autonomous city, with its own government, legal and monetary systems, and immigration policy despite being under Chinese rule.

But there are growing demands by Hong Kong citizens for Hong Kong to break away from China, particularly following the pro-democracy Umbrella Movement in 2014. Lam said Tuesday she will have none of it.

"On the issue of Hong Kong independence, in line with what the premier has said, there is no future and no room," said Lam.

Locals are growing increasingly concerned over Beijing's potential to increase Chinese control over Hong Kong. Pro-democracy protests, including the Umbrella Movement, were quelled in recent years, adding to their worries.