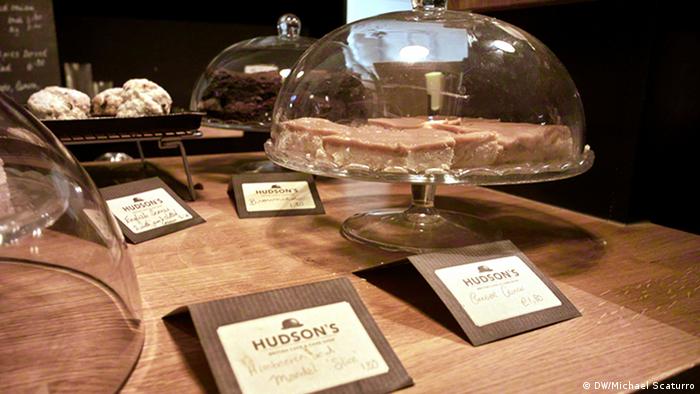 Two middle-aged women are smoking at a large bar made of darkly stained wood. One is drinking a draught beer, the other a cup of drip coffee from the pot warming itself on a shelf behind her. Michael Jackson's "Beat it" is playing in the background. In a corner of the sullenly lit, carpeted tavern, two men are eating what appears to be a heavy goulash.

I enter the Kneipe, as it is known in German, and think to myself, "Have I traveled back in time?" This dour setting could be 1983. But it is not.

In many parts of this city, people can still be seen smoking away the afternoons while washing down heavy meat dishes with large glasses of beer.

But that's the Charlottenburg district in the bad old West. In the more stylish neighborhoods, the scene could not be more different.

Into the culinary oasis 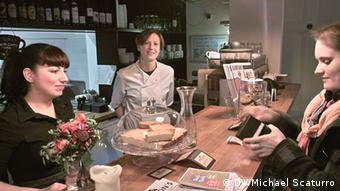 Kate Hudson's (center) English treats give her a niche

Just a few subway stops away in Kreuzberg, 20-somethings are tapping on their silvery MacBooks while sipping coffee and nibbling on English pastries. The smell wafting through the space is not of cigarette smoke but of buttery, cooling shortbread. Owner Kate Hudson is just removing a tray of shortbread from the oven as I enter her café.

Hudson, in her mid-30s, sports a white chef's smock with the sleeves rolled up as she emerges from the kitchen. "I came here on a sabbatical with my husband for a year. After 15 years at the BBC and three hours of commuting every day - I really needed a change!" she told me.

She started small, baking in her home kitchen, first in her free time, and later throughout the day in order to supply cafés around town with authentic English delicacies. Two years ago, she opened her own location on Boppstrasse - which, as I can readily attest because I lived on it 10 years ago, was once one of the driest outposts of Berlin's many food deserts.

But things have changed markedly over the past decade. "Food has exploded, not just in Berlin but everywhere," Hudson said.

In her case, Berlin's low rents allowed her to finance the opening of her own location with money she made selling her house in London. "I couldn't afford to do it in London," Hudson explained. "Low rents here make a big difference. Plus, being British here makes me a niche."

One thing you notice repeatedly - whether at the Israeli restaurant around the corner from Hudson's, the gourmet café shop down the street staffed by fresh-faced Australian baristas, or pop-up food fundraisers by artists like filmmaker Liz Rosenberg - is that many of these businesses are managed, and in many cases owned, by young people. 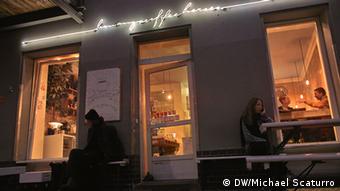 Bonanza has found its feet after a rough start

"You see more young people working in the food industry," pointed out Hudson. "It probably isn't something most would have considered 10 years ago, but the economic situation has forced people to think about what they want to do with their lives."

Benjamin Pates, a 20-something, British-American, says he never explicitly set out to work in the coffee world, but the fit was right. Bonanza, the café he helps run, has "managed to stay sort of under the radar," despite write-ups in magazines like Monocle.

At any time of day, café dwellers are perched on Bonanza's white stools, lined up at the window like looking posts. If the place resembles one of those vibrant hubs of creative activity that people like Richard Florida write about - well, that's because it is.

"The attention was overwhelming right from the start," said owner Kiduk Reus. "But the money was not immediately so good. I'd never worked in gastronomy before. We encountered all sorts of problems. For instance, our location - it wasn't great at first."

Start with a novel idea

Reus, in his 30s, is a Dutch-Korean who started Bonanza five years ago together with German-Korean business partner Yumi Choi. He says Bonanza was the first roaster of its kind in Germany to think of coffee beans as "fine produce" rather than as a mere commodity.

Like Kate Hudson's bakery in Kreuzberg, and a slew of new restaurants in rapidly gentrifying Neukölln, Reus says his roastery became a focal point of its neighborhood. But why did he move to Berlin?

"I used to work in advertising, but I didn't want to do that anymore. I was looking to do something for myself. This happens a lot with creatives - they leave their professions and usually go into roasting or some other gourmet food business. So I saved up some money in Amsterdam and then I just started it." 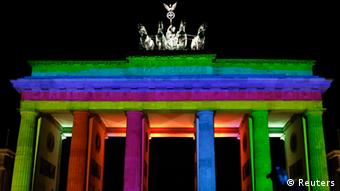 Down the street at Chay Viet, a vegan/vegetarian Vietnamese restaurant, Nguyen Thi Quelam has a similar story. The 28-year-old had worked in gastronomy for a few years before she and her aunt decided Berlin needed a healthy, gourmet Vietnamese restaurant. They traveled to Vietnam and visited a Buddhist monastery known for its strict vegan cooking methods.

"The monks let us come into the kitchen to see how they cook," Nguyen said. When she and her aunt returned to Berlin, they ran into some challenges when they tried to recreate the dishes they had seen in their homeland.

"We had to create several new concepts. The spices that we wanted are only available in Vietnam, so we have to use bananas and other foods. We had to reinvent the recipes with things we could get in Germany," Nguyen explained.

The restaurant is about six months old, but the lunch business is already brisk, and the dinner crowds are growing.

As I write this, tenants are working through their punch lists in a new apartment building on my street. The flats sold for upwards of four thousand euros per square meters - "Shocking!" say my landlords. Though the building's retail space on the street remains empty, the likelihood is that, within a few weeks, some kind of gourmet business will have moved in with an exotic alternative to stale coffee and rib-sticking goulash.

Out and about in Spanish-speaking Berlin

Berlin's Spanish and Latin American community has been rapidly expanding for years. From great tasting Mexican food to lessons in the art of the Spanish language, DW's Andrew Bowen has been reaping the benefits. (02.11.2012)

A young Berliner is changing the way people eat meat - by giving the sausage he sells a face. Not everyone, though, is prepared to eat a pig after seeing its picture online. (23.04.2012)

Berliners guard their few remaining 'Markthallen' - the old market halls that have the city's history written into them - with a pathological jealousy. They hate shopping malls, though. (02.03.2012)

Germany has spent winter in coronavirus lockdown. Spring is now here, and the country is slowly opening, but cases are rising, and the vaccine rollout is going slowly. How are people coping?