Berlin entrepreneur sells sausage with a face | Environment| All topics from climate change to conservation | DW | 23.04.2012

A young Berliner is changing the way people eat meat - by giving the sausage he sells a face. Not everyone, though, is prepared to eat a pig after seeing its picture online. 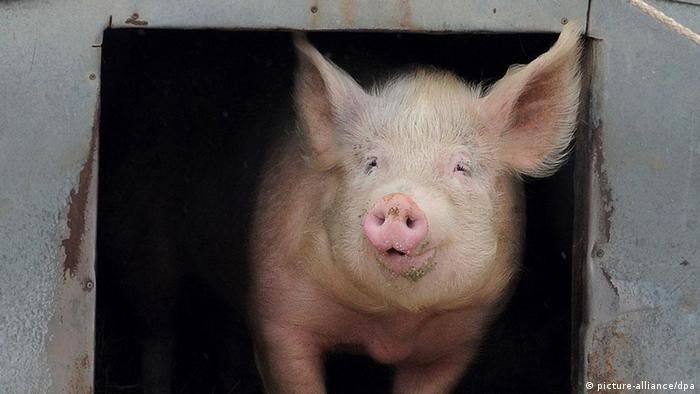 Nowadays, meat usually comes sliced and packaged up in plastic. Rare is a venture into a butcher's shop to select a choice cut, and seldom do we connect cows, chickens and sheep with the steaks, sausages and lamb chops in our shopping carts.

Shoppers also don't see the fields where vegetables grow or the conditions in which animals live before they end up on the butcher's block.

But Dennis Buchmann of Berlin has been trying to tackle this disconnection. His project "MeineKleineFarm" ("My Little Farm"), which he launched last November, aims to inspire people to eat meat more consciously.

One way he raises awareness is by giving food a face - literally. Visitors to his website can find photos of pigs running around in the fields of Bernd Schulz, the farmer he works with. Customers can get to know the pig that ultimately lands on their plate. 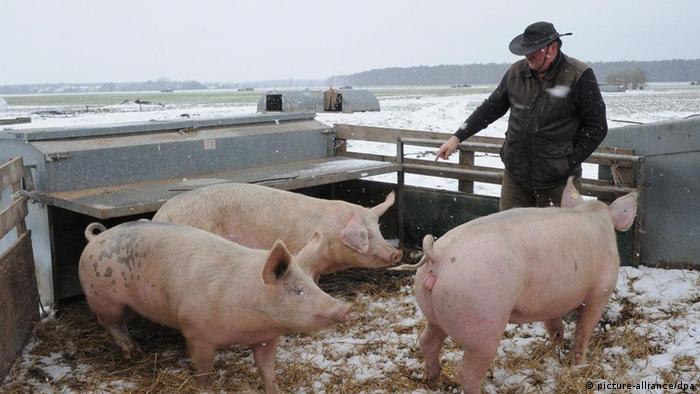 Organic farmer Bernd Schulz on his farm in Brück, south-west of Potsdam

Digging in the dirt

MeinKleineFarm.org initiator Buchmann said he loves to eat meat himself, but he wants to know that the animals he's eating have had a decent life.

"Imagine you are a pig and you have this wonderfully big nose that's been genetically programmed to dig around in the ground all day long," he said. "But imagine you are standing on some concrete floor all the time, never able to use your nose in the way you should. It's very sad."

The concrete floors Buchmann is referring to are those in the factory farms where most pigs are raised, often crammed together in buildings, never seeing the light of day. Farmers often remove pigs' teeth and tails since the cramped quarters make them aggressive.

The pigs shown on MeineKleineFarm.org, on the other hand, lead a life running around at Bernd Schulz's organic outdoor farm - digging their noses into the ground, mud and all.

"MeineKleineFarm is my project where I want to get people to eat less meat with more awareness. I want people to think about their meat consumption," said Buchmann.

Technology for the greater good

Buchmann works at the BetterPlace lab, a think-tank that focuses on how digital technologies can be used for the social sector. He's also studying at Berlin's Humboldt Viadrina School of Governance, where each student has to have a project with a political aim.

Instead of bombarding people with pictures of how animals are mistreated in factory farms, Buchmann decided to try a different approach: linking up meat consumers to the animals they eat.

Buchmann contacted the organic farmers association to find a suitable organic meat farmer. It just took a few minutes for him to convince Bernd Schulz to join in on the project. 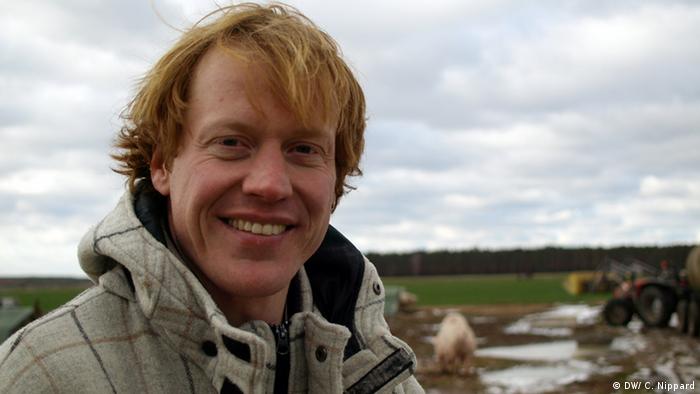 Look the facts in the face

Schulz has 80 sows, three boars and quite a few piglets. Compared to factory farms, the pigs live almost twice as long on his land. They're happier and healthier and get to stick their noses in the mud all day. On the MeineKleineFarm.org website there are pictures of nine pigs which were later slaughtered and made into sausages.

For some people, it might be a bit disturbing to see the actual animal they are going to eat. But according to Dennis that's the whole point.

"If you want to eat meat, you need to kill an animal. I think that's ok if you have an animal that had a quite ok life. If you cannot look the fact in the face that animals have to be killed for meat, then you need to become vegetarian," said Buchmann.

A quick scout on the streets of Berlin, brandishing a jar with the face of pig number 2 on it, prompted some interesting responses.

"You have to trust that is actually the pig - but I really like the idea of knowing where your meat comes from," said Alice from Melbourne, adding, "If you're going to eat meat, you have to accept the consequences that it actually does comes from an animal."

When asked if she would eat meat with a picture of the actual animal on it, at first Jessie from London was a little taken aback. "Well my initial reaction was no, that would be really weird. But when I thought about it, it kind of made sense. We should know the process. We should know where our food is coming from," she said.

Ralf grew up in a small village surrounded by farms in Germany's Black Forest. He said the farmers there wouldn't eat their own livestock because the connection was too strong. Instead they would sell their own cows and buy their meat from somewhere else. 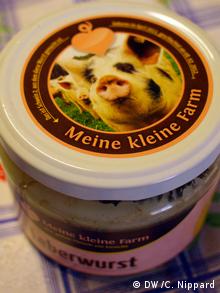 A jar of Leberwurst sold at "Meine kleine Farm"

According to Mahi Klosterhalfen, CEO and vice president of the Albert Schweizer Foundation, a German animal protection organization, MeineKleineFarm is a step in the right direction towards increased transparency. However, he pointed out that there are no photographs of the slaughtering process on the website and he was also critical that the pigs are given numbers rather than names.

"Obviously it's a lot better than factory farming and we applaud every step towards treating animals more humanely, but we also encourage people to go the next step, and there always is a next step," said Klosterhalfen. "You could just leave them alone."

Dennis Buchmann said that the animals are not given names because he doesn't want to anthropomorphize them. They are not pets; they are meant to be eaten. Dennis isn't about to go vegetarian and neither are his customers. From a pig that weighs about 120 kilograms, one can produce about 250 jars of Leberwurst meat spread, 50 big salami style sausages of around 600 grams each and about 25 rings of garlic salami style sausages.

Niklas Sum was one of Buchmann's very first customers and bought one of each type of sausage meat. While Sum wants to place another order, he said with the media attention MeineKleineFarm has been getting, there have been more customers than pigs.

"It's completely new that something is sold out. You're not used to that, you just go to a shop and buy whatever. So that is a new experience," said Sum, "You can't just go there and say, 'Hey Dennis give me some Leberwurst.' He would say, 'I'm sorry it's sold out, come back in two months.'"

'Women are more willing to alter their behavior'

Do men have a larger carbon footprint? Are women more eco-conscious? And why does gender and global warming matter? GLOBAL IDEAS spoke to Ulrike Röhr, an expert on gender issues and climate change. (03.04.2012)

Milk is considered healthy and it’s consumed in vast quantities, especially in industrialized nations. But it has a ruinous impact on the climate. Gerhard Flachowsky, an animal nutrition expert in Germany, says finding alternatives isn’t easy. (05.02.2012)

An environmental group has found large amounts of bacteria resistant to antibiotics in chicken meat bought in German supermarkets. Friends of the Earth say the findings show the perils of industrial farming. (10.01.2012)