The Turkish president has repeatedly shown video footage of the Christchurch mosque shooting. New Zealand's deputy prime minister discussed the screenings with Erdogan at an emergency summit of Muslim nations. 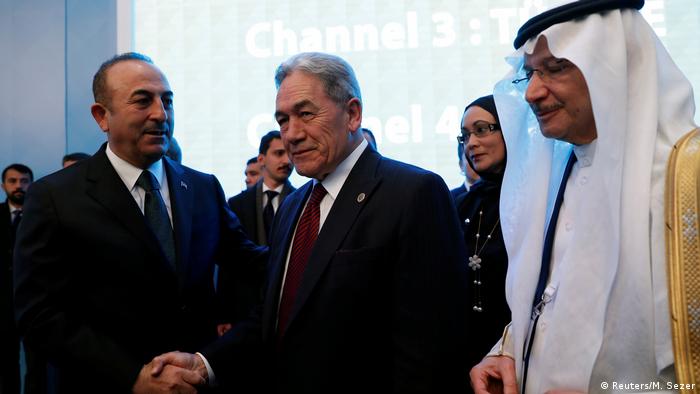 New Zealand and Turkey appear to have resolved a diplomatic dispute over a decision by Turkish President Recep Tayyip Erdogan to show footage of a shooting at a mosque in Christchurch that left 50 people dead.

New Zealand, which has tried to stop the footage from spreading, denounced Erdogan earlier this week for showing it at political rallies throughout Turkey.

What happened in Christchurch? Police have charged a 28-year-old Australian citizen with murder for shooting at least 50 people dead at two mosques during Friday prayers. The suspect posted a white supremacist manifesto before the attacks and livestreamed the shooting on social media.

Why has Erdogan showed the footage? The Turkish president screened excerpts of the shooting at rallies for upcoming local elections to denounce Islamophobia. Despite New Zealand's protests, Erdogan again showed footage on Thursday.

Erdogan's other contentious comments: The president has also vowed to make the shooter pay if New Zealand fails to do so and send anti-Muslim Australians "back in coffins" like their grandfathers who had fought against Turkish Ottoman forces in World War I.

Australia's anger subsides: Australian Prime Minister Scott Morrison summoned the Turkish ambassador to protest Erdogan's comments, but has since welcomed a "moderation of the president's views."

Two mass shootings at mosques in the New Zealand city have left 50 dead and stunned the world. DW brings you up to speed on the tragic events as details emerge about the right-wing extremist charged in the attacks. (16.03.2019)