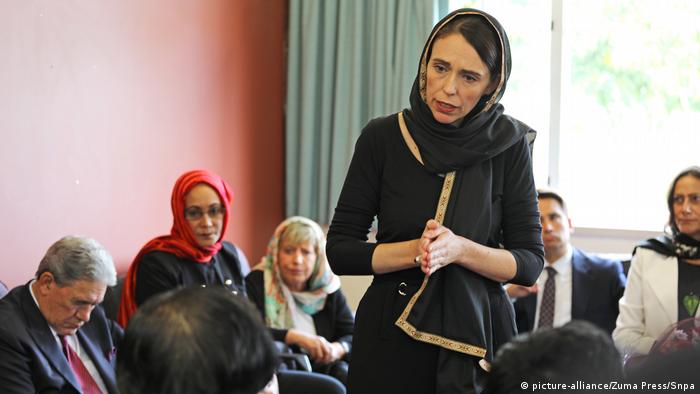 Sixteen months into her premiership of a center-left and nationalist coalition, backed by ecologist Greens, 39-year-old Jacinda Ardern is now taking on gun lobbyists, vowing that "all military-style semiautomatic weapons" will be banned in New Zealand, a tourist haven and farming nation with a reputation as green, laid-back and peaceful.

These are not issues that populist-era political "spin doctors" might recommend as broad vote-catchers.

But Ardern, knowing both New Zealand's proud multiethnic tradition and its furtive racist undertone and troubled past, entered politics aged just 17 and has never shied away from difficult debates. Past campaigns of hers include calls for caring societies to fix modernity's insecurities and narrowing the glaring rich-poor divide of recent decades.

Praise from a partner and rival

"Whatever you may think about what she says, there's a certain honesty of thought behind it," her Cabinet's deputy premier and foreign minister, the veteran populist Winston Peters, of the New Zealand First party, told Australian television early last year.

"She's genuine: She hasn't got airs and graces," Peters said, admitting that his accolade was somewhat "unique," given his own decades of abrasive rhetoric at Parliament in Wellington. New Zealand's capital is perched around a deep harbor buffered by winds from the Pacific and Sub-Antarctic; it's a close-knit community renowned for its rumor mill.

New Zealand's September 2017 election handed Peters' party 9 swing seats to decide whether to return the center-right National Party led by Bill English or side with Ardern's trade union-linked Labour Party, which had already secured backing from the Greens.

Peters told the nation that he had gone fishing to await the official count deadline, ultimately picking Ardern and Labour. When news subsequently emerged of her pregnancy, he slammed critics as being "narrow, silly."

Opening a grim Parliament session on Tuesday, Ardern began with a Muslim peace message in memory of the 50 people murdered at two mosques in Christchurch, a city still rebuilding after its 2011 earthquake.

Among the terrorist's victims were four children, aged 3, 4, 14 and 16. Inside the 120-seat Parliament, Ardern praised survivors who had rushed the gunman, who police later arrested, and vowed never to speak the perpetrator's name in public, to deny him the notoriety he craved.

Wearing a black head scarf on Monday, Ardern had already visited the Wellington secretariat of the Federation of Islamic Associations in New Zealand, which comprises eight Muslim communities, including Auckland, where she has her electorate.

"I visited Christchurch yesterday, and my primary goal there was to bring on behalf of New Zealand the message of grief and of solidarity to your brothers and sisters," she told the federation.

On Sunday she had briefed the nation, which lies over 2,000 kilometers (1,200 miles) east of Australia, by detailing funeral and security preparations while promising the extra provision of mental health therapists.

That reflects her and Labour's 2017 key election pledge to repair what it called "a huge gap" in the nation's mental health services by investing millions in "front-line workers" instead of perpetuating an "ambulance at the bottom of the cliff" setup.

At the Davos World Economic Forum this January, Ardern had sat alongside Britain's Prince William and told the world that New Zealand, prized for its nature and light, which captivates photographers, endured suicides, some among youth.

"One of the sad facts for New Zealand is everyone knows someone who has taken their own life. We are a small country, less than 5 million people, but last year over 600 committed suicide," Ardern told her Davos audience. "I've lost friends, and I wouldn't have to look far in my Cabinet to find others as well." 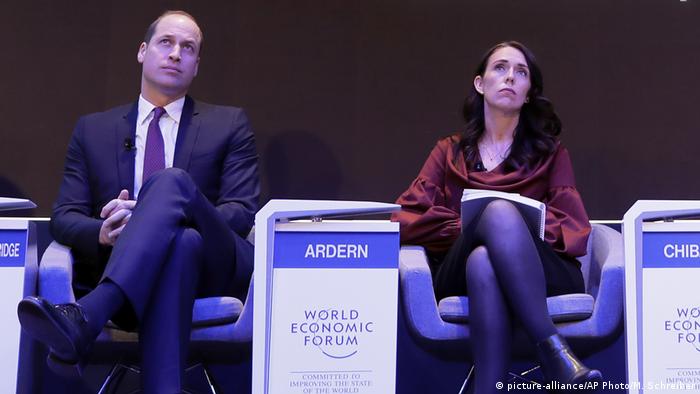 Ardern with Prince William at Davos

Ardern grew up in Waikato, in two farm and forestry townships on the volcanic central North Island, not far from the "Hobbiton" centerpiece of the Lord of the Rings and Hobbit movies. Her father was a rural police officer, her mother a catering assistant at schools.

Ardern studied political communications at the University of Waikato, in Hamilton, the region's rural hub. She interned first for Helen Clark, the former Labour premier, who became the head of the UN Development Programme, and then at Britain's Home Office in the era of Labour Prime Minister Tony Blair. She entered New Zealand's Parliament in 2008.

Assigned by the opposition to advocacy for children, women, youth justice and cultural heritage, Ardern rose the ranks within Labour before directly contesting and winning Auckland's Mount Albert electorate in a by-election. That win in March 2017 put her more into the limelight.

She accepted, prompting international media to really spot the "Jacinda effect." She soon floated the risky idea of a capital gains tax on the rich, one policy she still has not managed to implement. She emerged in October 2017 as New Zealand's youngest prime minister in over a century.

In February 2018, while pregnant, Ardern was a guest for five days at Waitangi, north of Auckland. This is the site of an 1840 founding treaty, where indigenous Maori had confronted past premiers over the often-brutal 19th century British-settler land dealings.

"Hold us to account," she told elders, referring to present and future Cabinets, "because one day I want to tell my child that I earned the right to stand here. And, only you can tell me that I have done that." 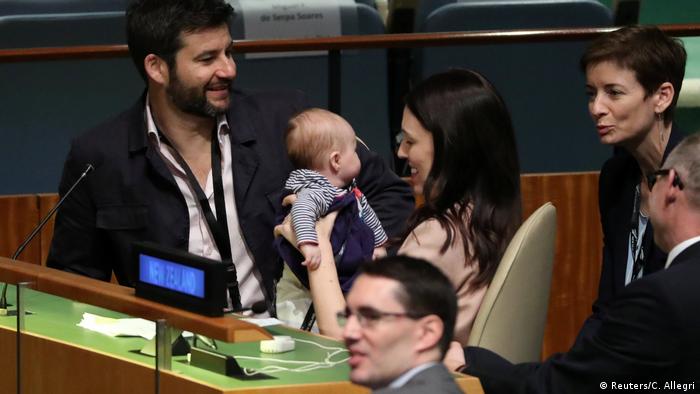 Neve with parents Ardern and Gayford at the UN

The prime minister pleaded at the UN for multiculturalism and efforts to tackle climate disruption — a key topic for the Greens supporting her Wellington government in crucial budgetary votes at home, echoing a pledge made last year to boost her nation's refugee quota.

After the massacre in Christchurch, she pointedly reiterated how much she values diversity in a phone call with US President Donald Trump, by saying that sympathy and love toward Muslims would be welcome.

Ardern had on Thursday attended Auckland's Polyfest — a celebration of the "diverse" Pacific and Asian cultures in a seemingly majority "European" nation, where 42 percent of children identify with two, three or even more origins via their parents and grandparents.

Last year at Polyfest, after visiting her parents in Niue, where her father served as New Zealand's high commissioner (and now on Tokelau), she told festival-goers:

"We went and made a stop there to talk about all the amazing work that's being done on things like renewable energy and protecting the sea life."

Her words were echoed by Fridays for Future pupils protesting in numerous towns.

Only hours later, a man identified as a 28-year-old Australian white supremacist struck in Christchurch during Islamic Friday prayers.

Rushed back to Wellington, Ardern first briefed the nation on initial details of the massacre, a tremor in her voice. Then, in her parallel role as national security and intelligence minister, she convened Odesk, New Zealand's secret crisis coordination committee.

As questions raged over whether the shooter acted as a "lone wolf" from his gun club milieu at Dunedin (south of Christchurch) or had far-right extremist backers and how intelligence agencies overlooked him, the anthropologist and author Anne Salmond wrote that New Zealand's furtive "racist underbelly" must be replaced "with different, better ways of being Kiwi." 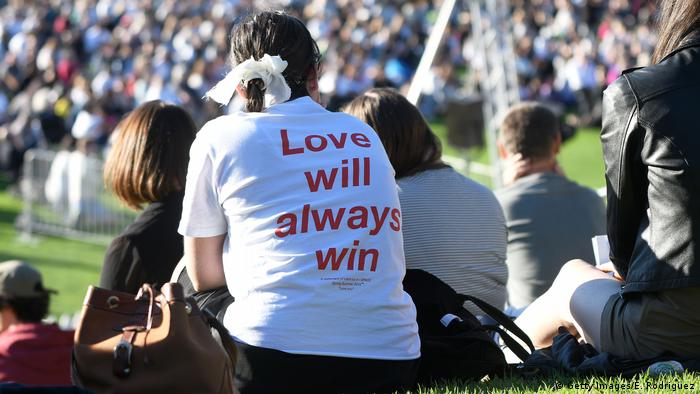 "After Maori, the indigenous people of this country, this sense of white superiority spills out over 'other' groups — Pasifika, Asian people, and now Muslims in Christchurch," Salmond wrote in an article that appeared in several major New Zealand newspapers.

To prove open-mindedness, residents staged vigils on Sunday, including 12,000 at Wellington's Basin Reserve, famous for its international cricket matches, and accompanied by the National Symphony Orchestra. The solidarity convinced many.

"I'm a proud Muslim Kiwi who couldn't be more blessed to be surrounded by such beautiful and supportive souls, thank you Aotearoa," a young Wellington graphic artist wrote on Twitter, referring to New Zealand in Maori, the country's other official language.

The opposition National Party leader, Simon Bridges, and former Police Minister Judith Collins, who was photographed in 2014 on a pistol range and in 2017 opposed changing firearms laws, both said they would now support Ardern's planned ban on military-style semiautomatic weapons.

"Everything changed on Friday," Bridges told journalists at Parliament.

Turkey's Erdogan warned anti-Muslim Australians that they would be sent back in coffins like their grandfathers at Gallipoli while commenting on the Christchurch massacre. His aides then tried to downplay his remarks. (20.03.2019)

"Being Pakeha" by historian Michael King

What does it mean to be a non-Maori New Zealander?