Military spending has surged across the globe, according to a new report published by SIPRI. With new advances in defense technologies, countries are spending more to gain an edge.

Global military spending reached $1.822 trillion (€1.632 trillion) in 2018, according to an annual report published by the Stockholm International Peace Research Institute (SIPRI) on Monday, marking a 2.6% increase.

The US is at the top of the list of biggest defense spenders, recording an increase of 4.6% compared to 2017. SIPRI researcher Nan Tian told DW that it represented the first increase of its kind "in the last seven years," and it's expected to grow substantially in the coming decades.

"They have started to implement a new modernization program of the military that will start in 2019 or 2020," said Nan Tian, who heads SIPRI's military expenditure project. "This is in the region of $1.8 trillion over the next 20 years. It is a massive amount of money being spent by the US — and it ranges from conventional weapons to nuclear capabilities."

Germany ranked eighth overall, spending 1.2% of GDP last year. Berlin, among other allies, has come under significant pressure from Washington to boost defense spending in line with a NATO target of 2% of GDP. 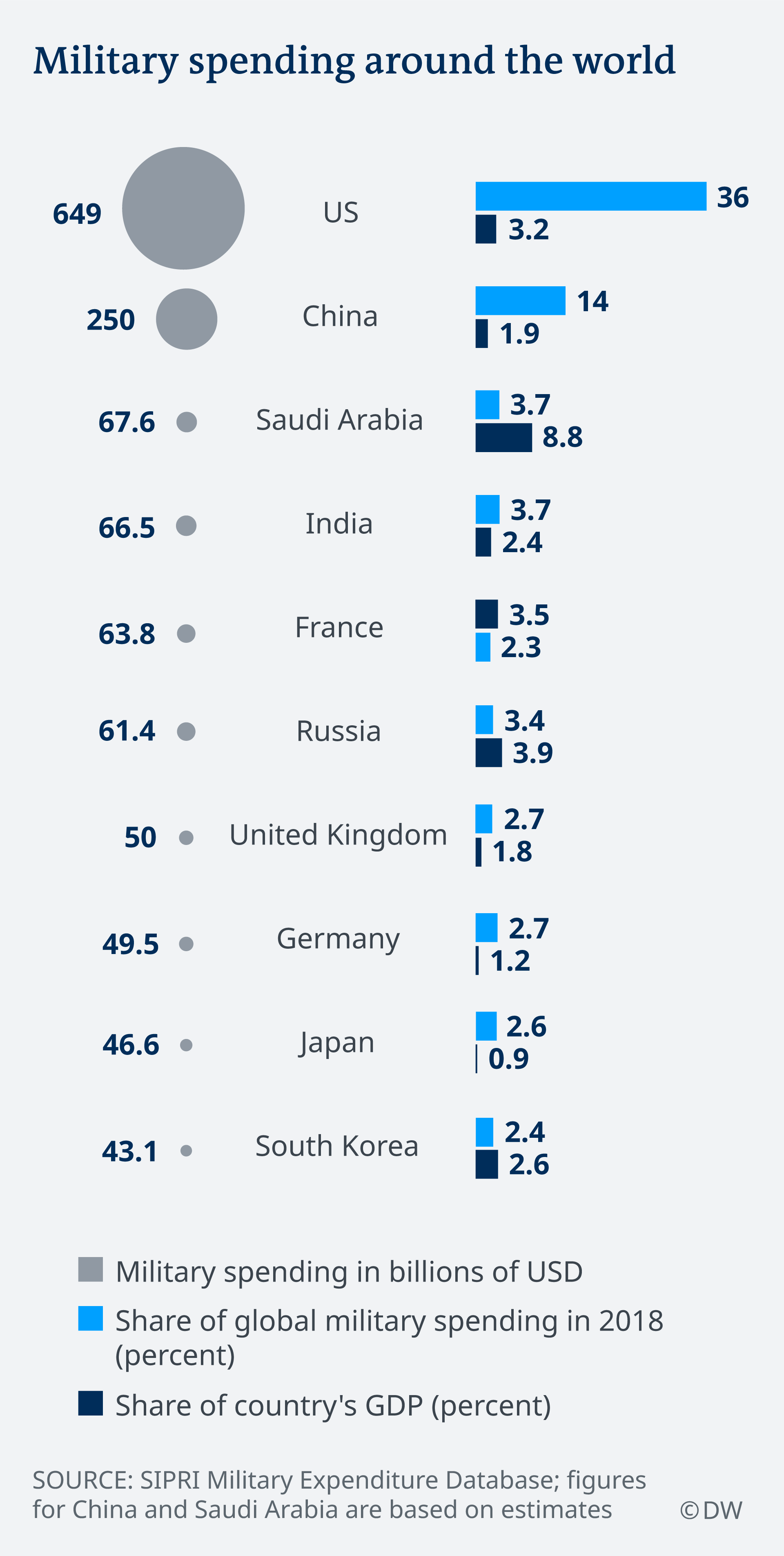 The German government has signaled its intention to meet the NATO target by 2024, the year that alliance members agreed they would reach that goal. But many in Germany are against such a significant rise in military spending.

Earlier this month, 53% of German respondents said they did not support raising defense spending to 2% of GDP, according to a DeutschlandTrend survey published by German public broadcaster ARD. Only 43% were in favor of it.

France and the UK, both NATO allies, were also among the top defense spenders. However, only the UK met the alliance target.

Russia, consistently one of the world's largest spenders on military equipment, fell from fourth to sixth place in 2018. But part of the reason for the decrease wasn't a shortfall in spending but currency depreciation.

"The Russian expenditure fell in 2018 by 3.5% purely based on inflation," SIPRI's Nan Tian said. "The actual spending in local currency, nominal term, has been constant between 2017 and 2018."

China, which ranks second in global military expenditures, has spent more than $250 billion on modernizing its military over the past decade, with defense spending rising by 83% during that period. While part of the spending is aimed at deterring US encroachment in the region, it is also in response to new weapons technologies.

"China does not want the US being so close to its neighbors or in the region — there are significant tensions between these major players," said Nan Tian. "I will not go as far as to say it is an arms race, rather that these countries are increasingly arming themselves with new, improved and better capable weapons, and these weapons are often very expensive."

"Today, we are facing a new frontier. In the digital age, technological progress is moving at lightning speed — with unprecedented and far-reaching impacts on the present, but also on future conflicts and warfare," German Foreign Minister Heiko Maas said at the time. "We need to think ahead and we must start thinking now."