Two months after taking office, Germany's new government is slipping in the polls. Voters are expressing dissatisfaction over the crisis in Ukraine and especially with Chancellor Olaf Scholz. 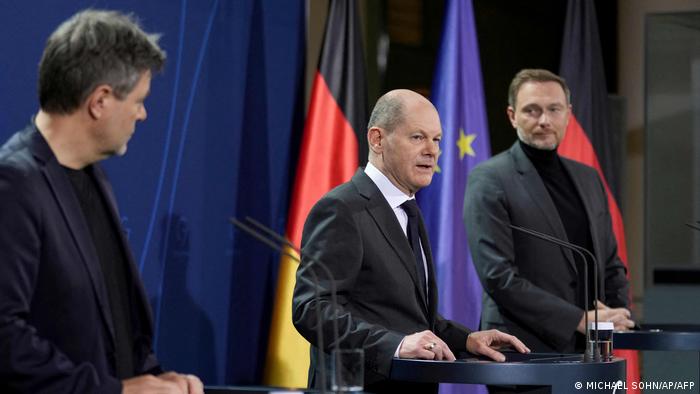 "Where is Olaf Scholz?" That's a question that has been circulating on social media in Germany since the beginning of the year.

Whether it's about arms deliveries to Ukraine, the diplomatic boycott of the Winter Olympics in China, the debate about introducing a general vaccine mandate to combat the COVID pandemic or measures against galloping inflation figures — the chancellor seems all but invisible, his statements seem vague.

This negatively impacted his approval ratings in the latest survey by pollster Infratest Dimap, in which 1,339 individuals across the country were polled by telephone (876) or online (463) between January 31 and February 2.

Only 43% of respondents said they were satisfied with Chancellor Olaf Scholz. One month ago that figure still stood at 60%.

But it is not only Scholz himself who gets bad marks. His entire party, the center-left Social Democrats, (SPD) is losing voter support — and significantly so. For the first time since the federal elections in September last year, the center-right Christian Democrats (CDU) of former Chancellor Angela Merkel and their regional partners the Christian Social Union (CSU) again have the strongest support.

The current tensions in the Ukraine conflict pose massive foreign and security policy challenges for the new government. Some 54% of respondents see the situation as a threat to Germany. But at the height of the Ukraine crisis in 2014 and again in 2017, when Russian-Ukrainian tensions flared up again, Germans were even more concerned.

The majority of respondents side with the German government and oppose arms deliveries to Ukraine, and only 43% are in favor of economic sanctions against Russia. The respondents were split on the question of whether NATO should issue security guarantees to Russia. There is more sympathy with Russia in eastern Germany, the part of the country that until 1990 was the communist East German GDR and a staunch ally of the government in Moscow.

57% of those polled said they thought the Nord Stream 2 gas pipeline should start operating and should not be on any sanctions list. The project, initiated by the previous SPD Chancellor Gerhard Schröder 20 years ago, has been completed and is awaiting approval from German authorities. It has long been criticized by governments in Eastern Europe and the United States but Chancellor Scholz only recently indicated it would not start operating should Russia invade Ukraine.

Supporters of the Green Party are the most critical of the project, which overall has significantly greater support in eastern Germany than in the west.

Support for the gas pipeline can be explained by rising energy costs in Germany. Half of all respondents, especially those with lower incomes, worry a shortage in gas supplies would push prices up even more.

How to best combat the COVID pandemic remains high on the agenda. Although infection figures continue to rise dramatically, the feared impact on hospitals has so far failed to materialize. As a result, calls for a relaxation of COVID restrictions are also growing louder in Germany.

Whereas 31% of respondents consider the current requirements to be excessive, 22% would like to see them tightened, while 44% believe the measures to be appropriate. A clear majority is in favor of mandatory COVID vaccination, while one-third is strictly opposed.

Over 80% of SPD, CDU/CSU and Green Party supporters are in favor of compulsory vaccination, the opposite is true of supporters of the far-right populist Alternative for Germany (AfD) where vaccine skepticism is especially high. A large number of voters for the neoliberal FDP and the socialist Left Party also oppose a general vaccine mandate.

Pollsters also learned that the 24th Winter Olympics in Beijing were of little interest to Germans, with less than 20% saying they are interested or very interested in the event.

Many have a problem with the venue: 66% say the decision to award the Winter Games to China was wrong. They cite human rights concerns and political repression, the environmental impact and COVID regulations as grounds for concern.