The historic Democratic Party national convention kicks off Monday in Philadelphia amid a new email scandal. The leak has raised questions about whether the Kremlin is trying to sway the vote in Donald Trump's favor. 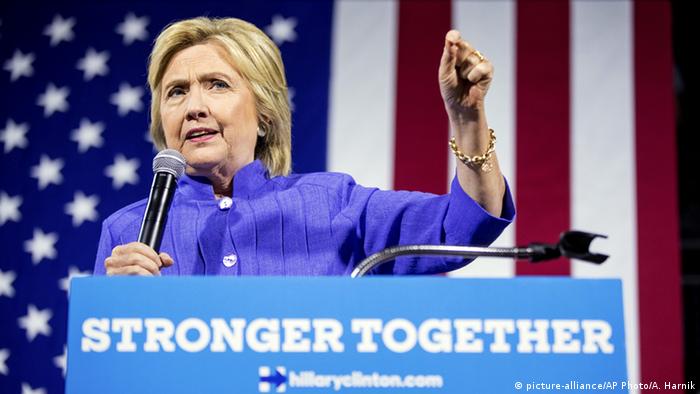 For the first time in US history, a woman, Hillary Clinton, will be nominated a major party candidate for president.

But on the eve of the four-day nominating convention, nearly 20,000 Democratic National Committee (DNC) emails - some indicating the DNC sought to plot against the insurgent candidacy of Senator Bernie Sanders, in favor of Clinton during the democratic primaries - were released by WikiLeaks and the hackers, who were based in Russia.

The DNC chairwoman, Florida Congresswoman Debbie Wasserman Schultz, announced she would step down as party chair at the conclusion of the convention in response to the leaks.

Hours later, the FBI announced it was launching an investigation into the email hack.

Democrats and independent experts agree that Russian intelligence agencies were behind the attack on the DNC emails.

The latest email scandal has reignited hard-core Sanders supporters who say they won't vote for Clinton in November. Thousands of them have descended on the DNC convention to protest Clinton's nomination, even though Sanders himself has endorsed her and will have a prominent speaking slot at the convention.

Despite the turmoil, the convention will be a star-studded affair featuring presidents past and current, powerful voices from the party's progressive wing and the first lady, among others.

Sanders and Michelle Obama are to jump-start the first day of the convention on Monday.

Former President Bill Clinton is the star on Tuesday, while President Barack Obama and Vice President Joe Biden will rally convention-goers on Wednesday.

The finale, on Thursday, will feature Hillary Clinton accepting the party's nomination, and making her case for the presidency.

Sanders said he would have preferred Clinton to have chosen the more liberal Massachusetts senator, Elizabeth Warren, as her running mate but said he wouldn't hesitate to support the Clinton-Kaine ticket.

"Tim is an extremely bright guy, a very nice guy," Sanders said. "Are his political views different than mine - yeah, they are, but he's a 100 times better than Trump will ever be."

More DNC emails are expected to be released in the coming days.